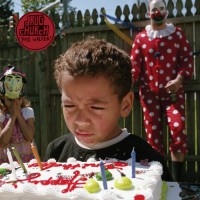 "Drug Church is the sound garbage makes when thrown off a roof into the dumpster your dickhead boss rented for your underpaying contractor gig. Come back in a few weeks and steal the copper piping because there's no other benefit to the job and you're probably getting sick from asbestos, so to hell with it."

"...the perfect record to listen to as you skate home from your night shift cleaning up puke in the bathroom of a Steak & Shake."

The above quotes are from Drug Church's Paul Walker onesheet, a promotional tool publicists use to entice writers to cover their bands. They're generally really drab and uninspiring because it's difficult to write bios for bands that are simultaneously interesting and grounded in reality, but in this case, the description we're given of Drug Church is both wildly entertaining and weirdly accurate. Paul Walker is an exercise in misanthropy, a collection of pissed off push-mosh anthems that don't mince words or thoughts out of fear or respect for others. In a lot of ways, it's pure, unadulterated id – which is oddly refreshing in an era when a lot of people literally make their living writing or talking about things they find offensive and What It All Means for society as a whole.

Drug Church are acutely self-aware of their misery, too. Title aside, opener "Thinking About Joining Drug Church" serves as a mission statement for the entire record: The opening lyrics of "You shoveled all the shit now / Here's some more, go on, dig down / Surprise son, it's your grave now / Jump in before they come âround" set an appropriately negative tone for Paul Walker, one that continues on songs like "Clifton Country" where the yelp of I want what you've got! is repeated several times at song's end, suggesting petty jealousy or at least knowing that other people will almost always have it better.

Musically, Drug Church's approach is refreshingly straightforward; the riffs perpetually hit hard but mostly stick to a calculated, mid-tempo structure – think Quicksand or latter-era Snapcase – and never meander too much, ensuring maximum punchiness. Vocalist Patrick Kindlon spits out lyrics in a scratchy, high-pitched howl; it's actually not that different from the style he uses in Self Defense Family, but Drug Church's music is so much more direct and less obtuse than SDF's that his voice seems a lot more different here than it really is.

Though there's nary a dud on Paul Walker anyway, there are plenty of standout moments. "Donny's Woods," with its repetitive, start-stop riffing and Pat Wynne's dirty bass work, is impressive; the guitar interplay "Reading YouTube Comments" is deceptively complicated and Kindlon's yells are akin to those of a dying man; "Thrill Hill" uses darker guitar and bass riffs as dual anchors, and becomes more intricate as it goes on without getting too weird.

Hardcore bands like Drug Church mostly don't exist in this era. There's been negative imagery in hardcore for years, but it's rarely been this direct or even this accessible. Paul Walker is painfully realistic, openly grim and socially unconscious, expressing a worldview that really, only Kindlon seems comfortable expressing in our scene. It may be a breath of different air, but the breath smells like filth and sounds like a death rattle.