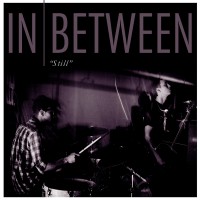 In Between. Never heard them before but glad I took the chance. Still is a great representation of what hardcore punk sounds like when done right, and while it's nothing excessively unique, it still comes off exceptionally fresh.

The quartet strive to show that without emphasizing much on screamo, they can still pull off throaty, mixed vocals in unison. "Second Person" and "Arm, Leg, Leg, Arm, Head" are a tad fractured compared to the rest of the record, as they're steeped more in the punk realm but you can't deny how brazen and solid they come off. They set the tone for the more outstanding "I've Paid (Recognize)" which lessens the vocal bullying from previous tunes, and drapes itself on the slower aspect of In Between amid the chaos. There isn't as much swift guitar work but it definitely remains the top song. Such a boss track doesn't play second fiddle to anyone.

The breakdowns give an edge on Still as the timing, shortened solos and inflective musical disposition add a lot to the don't-give-a-fuck essence of the record, which in five tracks, could be difficult or tedious to achieve. But the gents justify what they put out and they're on par. "Steady Hands at Seattle General" comes off wholesome with more of a melodic atmosphere and the well-timed flow with esteemed closer "Repeat Motion" are both prominent in highlighting why In Between have a bright future.

They remind me a lot of Bathurst. Thoroughly engaging and laced with bursts of energy, big ones at that, Still has a lot of flavor to dip into and it's the subtlety of the five tracks that's appreciable. Some consistency was missing at times but overall, the learning curve won't be that steep. There's already a great base laid down here.