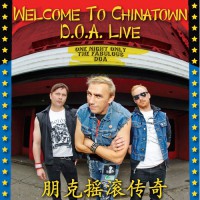 So this is the end. It won't be long now before Joe "Shithead" Keithley and his merry, revolving band of men in Canadian punk rock legends D.O.A. hang up their collective guitars, drums and bass along with a chainsaw for good measure. D.O.A. have been blazing a trail of hardcore for more decades than many of you have lived; they've fought for so many causes along the way that it would take up too much space to itemise each and every one, but suffice to say they've lived up to their own motto, 'Talk â Action = 0' at every opportunity. Keithley is now looking to fight his battles on a different front as a politician, in which the motto will hopefully be kept at the forefront of whatever he tries to do. There is no doubting his sincerity and motives in taking this leap.

With a final tour being set up as I write, D.O.A. take a bow with this live recording taken from three shows, spanning a period of 18 months, at The Rickshaw Theatre in the band's hometown of Vancouver. As one would expect, the tracks played on those nights provide as close to a greatest hits package as you'd ever find from the band.

So, that's the build up but the question is, does this album deliver? The answer is a resounding yes. I'll admit that it took me a track or two to get my head around the sound, which is big and beefy, and Keithley's voice, which is showing some sign of wear and tear. But this collection still provides more than just the one kick up the backside to remind us all that D.O.A. have been a potent punk rock force for 35 years. What is clearly evident is that D.O.A. have a wealth of great songs, beyond those from the early days, that can be used as a musical library for events such as these live shows.

I have my favourite D.O.A. songs and they all feature here: "The Prisoner," "World War 3," two variants of "Fucked Up Baby" (one for Ronald Reagan and the other for Canadian Prime Minister Stephen Harper), "2 + 2," "Disco Sucks" and "The Enemy." However, there's not a dull moment throughout the remaining 22 tracks during which Keithley's voice, despite signs of age, is as distinctive as it was all those years ago when the band first started. The one slight downside is that the guitar does not always come across as clear as perhaps I'd like whereas the bass is extremely powerful and at times it makes me think of Steve Harris of Iron Maiden, but then D.O.A. never shirked away from some rock influences during the band's career.

That rock influence changes some of the impact of the earlier D.O.A. tracks on this release, although it's mostly done with positive results. The one thing that doesn't change is the venom and spite inherent in Keithley's vocal delivery â you can tell that he still means every word he sings, and is as passionate now as he was when some of these songs were first written.

Live albums can be a bit hit or miss, but Welcome to Chinatown is certainly a hit and barring any reunions, serves as a strong epitaph for one of the best hardcore punk bands to have spread a counterculture around the world.