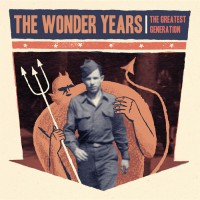 The Wonder Years are often described as the new "flag bearers" of the pop-punk world. Cut from the same cloth as their power-chording predecessors, the sextet rely on the same, typical song progression that you might hear in a New Found Glory or Bayside tune. While comparable, upcoming bands have struggled to reap a mass following, TWY seem to have struck a chord (albeit an often times overmodulated one) with the 17-to-20-somethings and are mainstays at Warped Tour as well as other punk rock festivals. The band are also successful in part because they are incredibly active in the studio, releasing their fifth album since 2008 in The Greatest Generation. The record completes a trilogy that began in 2010 with The Upsides and continued in 2011 with Suburbia I've Given You All and Now I'm Nothing, which featured one of their most popular tunes in "Came Out Swinging." Although The Greatest Generation doesn't possess a single quite as formidable, it is their most well-rounded album and a sign that the Wonder Years are ready to share the spotlight with an increasingly short list of top notch, active pop-punks.

Immediately noticeable is the band's comfort level with a softer sound. The Wonder Years rarely took the car out of fifth gear on prior albums, relying on an insistent up-tempo sound and an almost constant yell from front man Dan "Soupy" Campbell. In contrast, The Greatest Generation opens with Campbell barely singing above a whisper in "There, There" before the snare hits in and the group is back to their old form. They lean on this easygoing melody multiple times throughout the album, and even have the bravado to utilize it in first single "Dismantling Summer," which is a great indication of the band's evolved style.

Still, the Wonder Years are at their best when the beat is fast and choruses are big. Such are "A Rain Dance in Traffic" and "Teenage Parents," the latter being an honest examination of growing up a lower-class household. The two are comparable in tempo and sound as they start fast with hefty power chords eventually giving way to the throaty vocals of Campbell. Heavy on the pop, both are standout tracks on the album.

The musicianship may be strongest in "Chaser" and "Cul-De-Sac," songs that will leave you marveling at the band's growth from their past work. The transfer between tempos in each is effortless, while Campbell harmonizes perfectly with wonderfully harsh vocals of Matt Brasch in "Cul-De-Sec" before giving way to the high-pitched pipes of Josh Martin in "Chaser," whose ending yell is one of the album's highlights.

The most complete song on The Greatest Generation is "Passing Through a Screen Door." The song intros with Campbell belting the first verse over a simple, yet effective riff; eventually it breaks into a double chorus before giving way to a face-melting guitar solo. Wash, rinse, repeat, throw in an effective bridge and you have a hit (it is also one of their best live tunes). What makes the song fantastic, however, is its lyrics. It is a conceptual representation of the quarter-life crisis, conjuring the image of a mid-twenty-year-old muddling through his boring job while questioning his wifeless existence. It is certainly a relatable track.

The theme of self-doubt reoccurs throughout the album, inspiring some passionate and well-written lyrics. Almost every one of the tracks is so personal that it feels as if the band recorded their sit-down sessions with a psychiatrist, transcribed their conversations and plugged them into the lyrics. This is most apparent in "The Devil In My Bloodstream" as the band grapple with the conundrum of growing up yet finding a way to stick to their roots. Ultimately, the writing is strongest aspect of The Greatest Generation as TWY are constantly candid while naturally relating to their target audience.

Each song adds its own piece to the record, whether that be through introducing a different lyrical concept, or varying the musicianship. The Greatest Generation comes to a head in its final track "I Just Want To Sell Out My Funeral," an anthem-like, seven-minute production interweaving lyrics and instrumentals from the previous twelve songs into a memorable finale. Think Fall Out Boy's "What A Catch, Donnie" for comparison.

The album isn't without its down points as "An American Religion (FSF)" and "Madelyn" are undoubtedly filler songs. Those hiccups, however, should be overlooked. The Greatest Generation is a powerful, personal and creative masterpiece that is undoubtedly the capstone of the Wonder Years career to this point. It won't go down as one of the genre's greatest albums, but it's a massive leap in the right direction for the band who, in the minds of many, are the best at it.