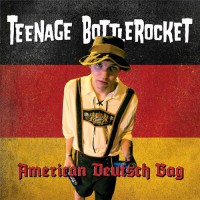 If you haven't heard, the Lawrence Arms are coming out with a new album. Yeah, for realz. After eight long years, they're finally ready to release Metropole. In anticipation, they previewed the track "You Are Here." According to Brendan Kelly, the new record is "mature." Go figure. When Noisey probed Kelly to explain how the Arms have grown, he responded by saying he isn't going to write about "fucking skateboarding and smoking pot." Contributor Dan Ozzi rebutted with the ostensibly insulting, but rather astute, comment that some bands do. Some bands, like Teenage Bottlerocket. Well, perhaps Ozzi hasn't listened to Teenage's new record, American Deutsch Bag, but what it advances is the notion that they do have more mature messagesâ¦ sort of.

American opens with the obtusely titled "Ich bin AuslÃ¤nder und Spreche Nicht Gut Deutsch," a meditative track that reflects on challenging issues, such as the ontology of foreignness, demonstrating cultural sensitivity, and the inability to speak German. You know, real world shitâ¦ I'm kidding. Still, the song is impressive despite its minimalist approach. By keeping the scope small and working within a defined, derivative structure, Teenage are able to create something out of nothing. For example, the entire track is sung in German, which plays well with pop-punk's penchant for over-enunciating cacophonic sounds. Vocalist/guitarist Ray Carlisle punctures words like "ich" and "nicht" with the unflappable ease of a native. Moreover, Teenage still remain one of the few bands playing today who can craft a song designed on one line of text repeated over and over to different vocal melodies without it becoming stale or annoying. "Go Away", from 2005's fan favorite Total, was brilliant and set the bar high for this kind of niche songwriting, but the ability of guitarist/vocalist Kody Templeman to harmonize with Carlisle adds imaginative depth where most bands would lazily plateau. Actually, all of Templeman's supplemental vocals are brilliant, from the static-filtered "ah ah ahs" reminiscent of a shitty '90s pop-punk band, to the impressive register-scaling notes hit near the end, the entire harmony espouses an insatiable affinity toward melody akin to that of the Vindictives.

Of course, they still do sing about smoking pot, as indicated by the brazenly referenced "I'm the One Smoking Marijuana Motherfucker" â an eloquent sentiment lifted from Dazed and Confused, the coming of age â90s flick about â70s-era teens. You remember the scene: Mike observes the smell of pot in the air, to which Clint retorts with a schoolyard zinger, asking if he's "Isaac fucking Newton" before antagonistically declaring it's in fact him smoking weed. Teenage only sample the last line, a fitting introduction to an angsty, â80s East Bay-inspired tune that, in addition to smoking reefer and "taking bong rips," encourages us to consume pizza, fuck cops and â no shit â ride skateboards. The fast, angular guitar riff rivals the unassuming and politically juvenile lyrics (e.g. hippies that don't smoke pot are apparently cops) in unexceptional mediocrity, even by pop-punk standards. It isn't the worst song ever written, but it's pretty forgettable.

Teenage Bottlerocket close out with a cover of "Via Munich" by the late, great Tony Sly (repurposed from the The Songs of Tony Sly: A Tribute collection). Tip your hat to them because it's a respectable and classy move on their part given his recent passing. But aside from the obvious connection to some sort of loose geographical/cultural concept, I'm not quite sure why they decided to include it. Teenage do little to appropriate the song as their own, replicating most elements nearly identical to the original. Templeman and Carlisle do trade lead vocal duties, which creates a dynamic quality that is absent from the original. It gives the impression of two friends speaking earnestly to one another despite their remote locales, as opposed to the solemn, pacified soliloquy in Sly's version.

In consideration, American Deutsch Bag is like that one flavor of Gatorade you just can't bring yourself to drink because of its awful aftertaste. Initially, you appreciate the record because it cordially represents the type of pop-punk Teenage Bottlerocket have been writing for over a decade, so it's fairly enjoyable. But once done, you realize cheap gimmicks and songs about pot have limits. No doubt, American Deutsch Bag is a fun record, but at some point you'd like to see a little more growth.