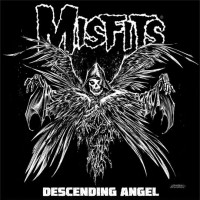 The new Misfits single demonstrates what's right about Misfits Mark III. True, the a-side, "Descending Angel" is just a re-cut of a song originally from Famous Monsters, but the new version shows the core strength of all three members. Most notably, Jerry Only's voice has continued to improve and here it is at its best to date. Now a combination of doo wop crooning and revved up punk shouting, his voice is as rich as it ever was and he's continuing to develop his own style. Where he once used to shout or merely emulate Dion, now he's taking his inspirations but also adding his own spin on vocals. Drummer Eric Arce, who was chained to mid-tempo clomping on Devil's Rain, is finally let off the leash. He's not playing at Robo speed here, but the slightest increase in tempo does wonders for both his own flair and the band's performance. Instead of following the beat, the group is now thrown forward by it, forcing them to keep up and every so often, get close to flying off the rails. frankly, it sounds like the band is having the most fun they've had since Only took over for vocals. And of course, Dez Cadena- as always, his distinctive blues-meets-punk-meets space rock style is evident, chopping out sharp, energetic riffs. Also, that tone. That tone, maaaan. there is a reason why Cadena has been drafted into so many famous bands- Black Flag,, Redd Kross (briefly), The Misfits- it's because no one sounds like him.

The flipside is a studio rendition of the Rocky Horror Picture Show classic "Science Fiction/Double Feature," which appeared in a live form on "Dead Alive!" As before, the band is able to show off their chops. They don't deviate too much form the original version, merely increasing the temp, but Only again shows off his improved pipes and really, it works. Fitting that a singer influenced by the 50's legends does a faux-50's song. It's fun and doesn't appear to have any loftier goals than that. Because all the members here seem to simply be having a blast and are demonstrating their best performances on a Misfits record to date, I'm genuinely excited for the next Misfits full length. Recommend for fans.

The Infested: Eaten From The Inside