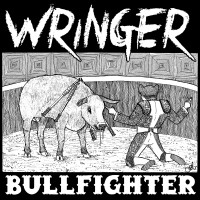 Although not exclusively the only record label dealing in bands that lean towards pop-punk, Lookout! Records was instrumental in kickstarting not just their own bands into the musical arena but the impact was felt far and wide across the world, as hundreds of band took onboard what they heard from the likes of Green Day, Monsula, Screeching Weasel et al in the late 1980s and early 1990s. This impact is still bearing fruit today in the form of Wringer. Wringer are a trio that sound as if they have been transported through time from that period when Lookout! ruled the pop-punk world. Wringer seem dumped into 2013, intent on reclaiming the genre from the hordes of wishy washy bands that have certainly taken away my enthusiasm for a sound that back in my mid-twenties I couldn't get enough of.

What makes Wringer so good? Now that's an easy one to answer â they know how to knock together and subsequently knock out a tune that contains a hook or two, some great sing-along moments and lyrics that don't suck (this last point is key guys and gals â if you're thinking of starting a band, consider your ability to write some well thought out lyrics, or at least lyrics, however dumbed down you might want them to be, which actually work). This isn't your overly sugarcoated pop-punk as this also has the punch of Dillinger Four to add a bit of weight to the album, hence adding to the sound from the last century. Really, that's all there is to say about the band and their debut album â if you like pop-punk then I'd have to say this is an essential listen as we're not blessed with bands this good every day of the week. I'm still a massive fan of Green Day's best album 39 Smooth (let's see the comments section go wild now!) and Bullfighter does at times remind me of that gem. Especially with elements of the vocal performance, which contains some moments that sound as if they could have come from Billie Joe Armstrong âback in the day'.

The album is currently available on CD via the Japanese label Waterslide but is also available on Bandcamp to download and will be out on vinyl in March 2014, so should keep everyone happy regardless of which format one prefers.