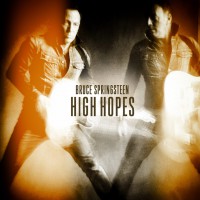 It's hard to avoid feeling like Bruce Springsteen hedged his bets with new release High Hopes. When he brought back some old tunes for 2012's Wrecking Ball, it was billed as a return to form (and rightfully so). When he does it for High Hopes, it's meant as a rarities collection, as if that would explain away its lack of cohesion, singles and general quality. It's actually more in keeping with Springsteen's classic sound than Wrecking Ball by recalling The River and even, briefly, The Wild, The Innocent & The E Street Shuffle. it's just not very good.

Springsteen has notoriously shed songs over his lengthy career (anybody ever hear Steel Mill?), so the idea of a rarities comp isn't bad. The Tracks box set is amazing, as is The Promise, a double album of songs cut from Darkness on the Edge of Town. The problem with High Hopes, besides the whole lackluster thing, is that it's a rarities comp with no audience.

By not calling it a new full-length, Springseen implies that High Hopes is intended for diehards and not casual fans. But few diehards will look at these overproduced recordings of live staples as definitive versions. "American Skin (41 Shots)" is stuffed with strings and studio tricks, and while it's meant to be tasteful, it can't touch the solemn, gospel-tinged version on Live in New York City back in 2001. The full band take on "The Ghost of Tom Joad," featuring Rage Against the Machine/Audioslave journeyman Tom Morello, fares better, but it feels redundant given that it already appeared on the Wrecking Ball 10-inch. A cover of Suicide's "Dream Baby Dream" comes packed with electronic beats and even more strings, but anyone who's heard Springsteen's solo organ version from his Devils & Dust tour has heard it done better.

But High Hopes is not without its charms. There's maybe an EP's worth of strong tracks here that hearken back to The River's more radio-friendly tendencies, like the catchy "Just like Fire Would," "Frankie Fell in Love" and "This is Your Sword." These tunes have a breezy summer vibe. They also have a bit of a B-side quality to them (the structures for a lot of the choruses are simple recitations of the titles), but they're not half-bad. The title track, a Havalinas cover that Springsteen originally tackled on 1996's Blood Brothers EP, boasts New Orleans horns and much more spirit than the rest of the set.

High Hopes should have been much better. Given Morello's dynamite live sets with the E Street Band, it's a shame that the Springsteen album with his biggest influence is so underwhelming. Deceased members Danny Federici and Clarence Clemons get dredged up again for another tribute. If anything, High Hopes just makes proper albums like Wrecking Ball and Magic sound better by showing the detritus Springsteen had to clear away to get to those records.