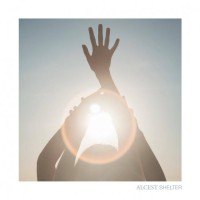 It's telling that when metal mag Decibel asked Alcest frontman Neige for a playlist, he submitted whole albums by Smashing Pumpkins, Dead Can Dance and Slowdive. While Alcest's brand of black metal has always been off-center thanks to influences ranging from folk to shoegaze, the band's uneven new album, Shelter, is perhaps their least "true metal" to date. The songs are slow and more melodic. There are no blast beats. Some of the lyrics are in English.

Then again, Alcest was never strictly black metal in the beginning either. Neige has long favored folk rhythms and classical guitar interludes; he just happened to like juxtaposing them with double bass drum and shouted vocals. Still, even by their standards, the album is a huge departure from Les Voyages de L'Ame. The band still gets epic on occasion (dig the nearly eight-minute "Voix Serenes"), but the structures have more of shoegaze/drone bent.

Fans got a taste of the new Alcest with advance single "Opale," but that song doesn't quite capture the album's bleak, swirling atmosphere. If Shelter is Neige's Disintegration, then "Opale" is "Lovesong," a brief burst of pop packing a killer chorus. Instead, the album is defined by slow burners like "La Nuit March Avec Moi" and "L'Eveil Des Muses." Recalling Sigur RÃ³s with heavier drones, these tunes lumber into darkness, devolving into feedback.

Shelter might actually lumber a little too much. While the title track adds a slight dash of energy, the record really trudges through its final two songs (out of eight). "Away" embarrassingly comes off like a grunge ballad. As great as Alcest's previous records were, they were all in French, so for me the focus was always on how Neige sang, not what he sang. His English lyrics come off like cookie cutter angst. Eventually, "Away" blurs into closer "DÃ©livrance," a 10-minute tune that gradually swells to warm buzz. It's a slow song, but it really gets going around the six-minute mark. Then again, it's rarely good when a song takes that long to hit its stride.

Alcest was supposed to make a more mainstream record this time. That's what "Opale" promised. That's what they were supposed to forsake metal for. Instead, Shelter might actually be less commercial thanks to its lengthy running time and slowed down tempos. It's less dynamic, less technical, less energetic, less everything. These songs are like drawn out whispers, and while that certainly works in sections, there is a gross imbalance between Shelter's first and second halves. Given the lengthy, equally catchy intro afforded for the album version of "Opale," it's surprising that the record would drift off into Jesu Lite. With another single or two thrown in, the stylistic shift might not have been so jarring.