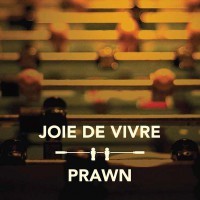 There's a lot of talk lately on the 90's 'emo revival'. Did it die or didn't it? Well, right now, the genre is alive and kicking. This split is a significant exclamation point that heralds this.

Joie De Vivre offer three tracks to show how strong their sound is. "Martin Park" is their typical emo banner that features spaced-out guitars and a twinkly atmosphere that's as catchy, gazey and head-bobbing as ever. The rhythmic ambiance is complemented even more with trumpets slapped in for good measure that provide more of a melodic, breezy and relaxed feel. It's music to lay in bed to and let the memory-reel flow.

"Good Morning Mr. Franklin" plays out the same way - straightforward in the nice, calm and traditional style that JDV's steeped in. There's nothing too intricate but when the track merges into a slightly heavier breakdown, you appreciate their transition as they explore more with dancing guitars and a break from the mold. Xylophones add a warm tension to "Fracture" which is one of their more heavy-hearted ballads. The dynamic of multi-layered vocals make them as radio friendly as ever, giving more credence to their indie-aura and fans who thought they should have garnered more recognition.

Prawn then caps it off with two tracks. They affirmed themselves even more in the 90's emo realm with Ships EP in 2012, a sincere ode to the genre. This time around, they seem to find their voice even more and rise above the spirit of past musical influences and loves. "Why You Always Leave A Note" has a Silversun Pickups vibe with a "Lazy Eye" intro. Slight distortion help condense Tony Clark's voice which are backed up nicely. The snappy percussion, hazy-guitars and math-rock presence have a pronounced effect. It's trance-inducing. Prawn do manage to stay within their accustomed hemisphere and this is affirmed with the sometimes wailing, sometimes cackling voice of Clark. The overlay of trumpets on "Tenspopet" snuggle in and dignify this as it pops off cheesy but so fitting. The ensemble of instruments unfold sweetly amid the well-worn indie vibe.

These bands do something here that's meaningful. They have a degree of spontaneity in their music that's good for nostalgia and realization. It's a self-reflecting and visceral record that's too strong to deny when you focus on the passion and discordant emo at hand. The raw emotion here is more than noticeable and I think both bands are yet to hit their true heights. In the meanwhile, they can continue to help fly the emo mast because they deserve their place as bands who do the genre justice, especially in contemporary times.

Pretty Boy Thorson and the Falling Angel: An Uneasy Peace

Integrity: Beyond the Realm of the VVitch [7-inch]