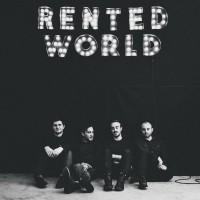 The Menzingers have written yet another great album entitled Rented World. Only, this time, they have taken a step back from the sound they had on On the Impossible Past and created an album that seems like it could have easily come out between that album and the one before it, Chamberlain Waits. In other words Rented World seems to have some aspects of their older material, some aspects of their last record, and plenty of new sounding tracks.

The two songs that they released before the album came out, "In Remission" and " I Don't Wanna Be An Asshole Anymore," are two fantastic tracks. However, they saved another very hard rockin' song called "The Talk" that maybe could have even fit in on A Lesson in the Abuse of Information Technology. For them, this is fairly traditional song that absolutely kills! They brought back more of their screaming in the choruses and this song has a lot more of their blatant anger that their older material had. Also, like their older albums, they even end Rented World with a solely acoustic song called "When You Died." Even the song "Bad Things" seems like it could have fit onOn the Impossible Past. It's one of the more darker sounding songs on the album with some fairly depressing yet deeply personal lyrics: Don't wait up for me my friend/I've been planning to watch the world burn down/All your friends are dead and gone. Even though some of these songs seem to be reminiscent of the Menzingers' older material, they all show a lot more maturity and growth in their song writing.

And don't think that this record this is just a rehash of older sounding material in new forms. It's not that by any means. The song (maybe you can even call it a ballad) "Transient Love" has a very different sound and melody than The Menzingers have had in the past, but it is filled with the dark and self-reflective lyrics that the they are famous for: I used to lie to myself all the time/I was always overreacting/Screaming âI'm gonna die.'" Interestingly, this song runs just over five minutes, which is probably their longest song to date. It is also worth noting that Joe Godino does an excellent job on the drums on the song "Rodent." That song has a very distinctive and complicated beat than what The Menzingers have typically have used in the past.

Long time fans of The Menzingers will most likely be very happy with Rented World, but new listeners who may have just discovered this band should probably wait to listen to this record and check out their earlier stuff first and then definitely come back to it.