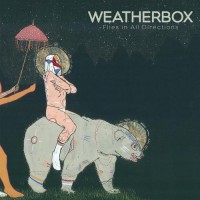 Weatherbox returns with a quite bit of snark and cheekiness that makes Flies In All Directions that much more interesting to absorb. Is it their most gripping musical outlay? Nope. However, it just may be their most all-round effort ...and more so, it's the one that surprises the most, sonically. Brian Warren really throws fans for a loop with the band's most catchy and singalong record to date but for lovers of American Art, rest easy because the musical direction is one that pays neat homage to the old days while evolving into something simpler. Simpler but much more progressive, which Warren's lyrical narrative highlights in spades here. It sounds good and most importantly, feels organic and synced up with their growth.

It's packed with the typical start-stop riffs, distorted guitar bends and angular hooks that make a Weatherbox album but a lot of the tracks take time to roam out of the sandbox. The pop-punk tunes like "Pagan Baby" and "Kickflips" bear a familiar sound and don't really shirk that much if you were addicted to "Armed to the Teeth" and such, but then, Warren mixes things up with indie-pop constructs like "Bring Us The Head of Weatherbox" - which is just one of a few shots at critics of the band. Warren responds to cynics in a manner that isn't bitter at all. In fact, embedding the sarcasm into a record that takes from sub-genres of twinkly indie-rock, pop-punk and alternative plays neatly off Warren's light vocals and timely falsettos of "ooh oohs", especially on this track. They take the time to meticulously and smartly integrate the openness and wandering rock-feel from The Cosmic Drama. And it pays dividends, subtly but still, it does nonetheless.

Specks of screamo, their old emo vibe and even aggression at intervals add timely spice to a record in which nothing's overdone. It's well-balanced amid the nodes of experimentation and shades of eccentricity which Warren's musical vision loves to explore in measured drops. "Bathin' In The Fuss" is a nice synth-pop swing of the bat to highlight this. Warren also finds time to factor a lot of acoustic tempos, which we all know he wouldn't shy away from to keep you connected with where they were then, and where they are now. "The Devil and Whom" brings out a Brand New-vibe and it's ironic, because quite a bit of the album also sounds like Taking Back Sunday in their mid-transitional states. Andy Hull of Manchester Orchestra guests on this to further expand on the religious themes teased at by the band. Some metaphors are a tad ambiguous but some aren't as obscure in an album that has an overtly mature lyrical direction. I didn't expect it to be this profound, even with such a musically laid-back and straight-forward sound.

The album is a bit longer than expected and not as compact as I would have liked. But despite a shift-up in sound, the new roads dug out by Weatherbox are littered with elements of the old trails. Makes for a fun listen and I'm optimistic Flies In All Directions will put them back on the map. It's not too intricate but still daring a move on the band's part. Recommended.

Apologies, I Have None: Black Everything

This Routine is Hell: Howl