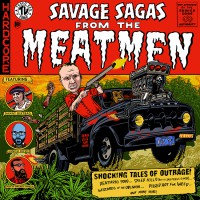 The central question presented by The Meatmen's Savage Sagas is whether they are continuing the great–tradition of button pushing or reacting to modern punk rock. The fact is, punk rock, as a whole, is much softer and nicer than it used to be. The Feederz used to fire AK–47 blanks at the audience. Black Randy would scam fans for drug money. Most Boston hardcore shows were really just arenas for fist–fights. Now, most bands talk about how they are "overwhelmed" by life or how much they like whisky. But, to be fair, that's not necessarily a bad thing, either. Really, what does fist–fighting or drugs or scare tactics really have to do with music itself– It's more theatre than it is a bearing of the soul, which is what we have now, in a great many settings.

That's why, on their eighth studio album, and first of original material in 18 years, the Meatmen seem so much nastier than those around them. On the album, frontman Tesco Vee has several songs about V.D., a few about beating people up, at least one trip to a low–rent strip club, and enough insults at people of various backgrounds that show he can't possibly be bigoted because he hates everyone.

It helps that despite the crude, rude humor permeating the album, you can tell that it's all delivered with a wry smile. Opening track announces the band's return with the hard charging, "We're the motherfuckin' Men of Meat!/ creatin' and âbaitin'/creatin' for Satan/we're the lean mean jeaned freaky fuck machines!" But, then, they immediately follow it up with "Dinosuar," where the band both makes fun of themselves for beating so old, but also, pat themselves on the back for remaining one the rawest, nastiest punk bands (in some form or another) for over forty years.

After the band gives themselves kudos, they then start smashing on anything within reaching distance. The Dwarves get slapped with "The Dwarves are the second greatest band in the world (after the Meatmen), throwing vinegar on that band's own "The Dwarves are still the greatest band ever." John Brannon of Negative Approach gets his own skit where his (limited) vocabulary is used as an action figure's speaking mechanism. Meanwhile, newer bands get wedgied with Tesco Vee spitting, "I'm still telling you that you suck!"

There doesn't seem to be a specific target that the band has in mind. They just seem to be throwing punches at anything– old bands, new bands, modern political correctness. The fact that they attack anything and everything seemingly without provocation betrays what's really going on here. Sure, when Tesco plays the part of a Jersey Shore type on "Anna Moose," it's funny. But, what he's really doing is showing how straight laced and scared of deviation most people– including most punk rockers– are. Throughout the album, Vee seems to be arguing for freedom of thought and expression. Most things aren't as serious as they seem and a good dose of humor can improve most things, no matter how grave they may seem.

Of course, all that would fall flat if the Tesco's band didn't elevate his Alfred E. Neuman stylings without cracking music. For the most part, the albums is rooted in hard, tight punk numbers. The band storms in, smashes up the furniture, an runs out before you can catch your breath. Wisely though, throughout the album's 20 track running time, the band goes off on a few diversions. The band salutes 60's country at one point, and at another, the band divulges in a little, roadhouse, rumbling blues. "12 Soft" is probably the best Buzzcocks parody ever recorded. The most impressive detour is closing track "Wizards of Oblivion," a blatantly heavy metal number that sounds almost exactly like Moorcock–era Hawkwind crossed with Black Sabbath. Not only is it hilarious, but it is heavy as hell.

By the time the wreckage clears, it become clear that despite his insults, Vee isn't mad at his targets– he just loves causing a ruckus. This is (mostly) good clean fun that has a bold argument under the yuks. So really, when Tesco blurts out, "I'm a sinner/I'm a saint/I'm a tounger of the taint!" he's not exactly detailing licking privates. But, he's not exactly reacting to new bands either, nor is just shocking people for the sake of shocking people. Buried in this debauchery is the same thing that has always been hidden there– Tesco Vee wants to shake up group–think as much as possible and the best way he knows how is to pick his nose, whip out a diseased member, hang out with wannabe mobsters, and tell people how great he is.

7 Seconds: Leave A Light On