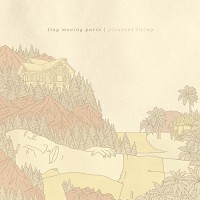 Tiny Moving Parts are a great example of "if ain't broke, don't fix it." This Couch Is Long & Full of Friendship to me deserved more hype in 2013 but even if it didn't register with the masses, it was one of the year's more endearing and genuine albums that really connected personally. Seeing that the transition into Pleasant Living come off so smoothly is even more pleasing as it seems lyrically, they've grown, and in this maturity, the experience factor kicks in —— whether it's because of the road or life in general. This time around, hearing Tiny Moving Parts chime in on struggles in the world, their ensuing failures and subsequently, a never—ending optimism to work around all of these, just seems to hit home a bit harder.

The record's jammed with very intricate musicianship. Dylan Mattheisen's guitars take indie and math—rock to a different level. He lays a lot of melody to tag along Matthew Chevalier's bass, which is the most prominent it's ever been —— really helping build a foundation for Billy Chevalier's drums. Instrument—wise, they've never sounded better and Dylan/Matthew's dual mic work add even more value to the mix. "Sundresses" offers up undertones of Dashboard Confessional —— something TMP strongly sound like when they go clean. Floating in between indie, math and pop—punk though, one of the big comparisons could well be Dads. TMP's musical mapping feels tighter and more melodic with each song. Overall, the album comes off emotively flushed with the dual vocals moving from lulls to loud swells. It's here the angst comes out in spades. The frontmen have a powerful dynamic and it's undeniable how effective they are in complementing each other. "Always Focused" emphasizes this as it shows how neatly they can dirty things up.

The technical aspect really brings forth a light ambiance to the record which works in favor of tracks like "Spring Fever," which has a La Dispute feel to it. Spoken more than sung. Poetry more than music. But nonetheless, it's art, amid the clean, polished studio production, which really is high quality. This factor weighs in a lot when the record's emotional density is translated to the listener because the words feel so inviting. I think this is ascribed to the fact that TMP have never really streamlined their sound, and why bother to? They seem better off musically when trying to stretch themselves thin as opposed to a condensed indie framework. You can look at "I Hope Things Go The Way I Hope" to demonstrate this point. It comes off like a We Were Promised Jetpacks—esque tune from 2011 yet when calm, feels like The Early November, which highlights how well they're able to switch up the game plan.

Pleasant Living isn't without its flaws though as it plays off a bit front—loaded. At times, the baggage comes off too melancholic and overly depressing but then they flip the script and really show why they're meant to generate buzz. Cue "Van Beers." It's a lovely emo tune (alluring horns and all) which pays amazing homage to the genre while giving the listener a sense of fulfillment. It sounds like going home after a weary few months on the road as the track weaves its way about losing touch and re—finding that sense of purpose. It parades as a perfect closer for coming of age novel from three guys who have so much more to tell, and hopefully in the very near future.

He Is Legend: Heavy Fruit