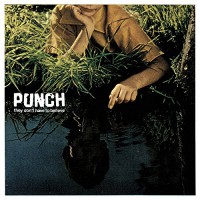 They Don't Have to Believe is the third full—length from San Francisco based hardcore band Punch. This album took on additional significance when singer Meghan O'Neil announced she was leaving the band shortly after its release. Instead of just being the band's latest LP, it would be judged as its probable swan song.

Punch's music is above average hardcore that sometimes ventures into grindcore territory. It's O'Neil's singing that really makes the band stand out from its contemporaries. Her lyrics are socially conscious and positive, although they are delivered with rage. The songs carry themes of self—empowerment and often have a feminist bent. Truthfully, O'Neil's singing is more like screaming, and maintains its intensity across these 15 tracks in 19 minutes.

You'd never be able to guess the content of this album by looking at its whimsical cover photo. From the opening track, "Worth More Than Your Opinion," it's obvious that this is less a punch than an all—out pummeling. Once the beating begins, it never lets up."They Don't Have to Believe" was inspired by a quote by Bikini Kill's Kathleen Hanna. It's a powerful statement about not needing outside validation. The album rages from song to song, and it hardly seems to matter where one ends and the next begins. "Promises Kept" adds a male voice to slightly change the dynamic.

This album's greatest strength and greatest weakness are two sides of the same coin. It all revolves around O'Neil's voice. While she is relentlessly exorcising her demons, she really only has one vocal delivery style. It's good, but it begs for something more. The music has hyper—speed riffs, breakdowns and squealing feedback to provide variety, but the scream remains the same. The reason this works as well as it does is due to its short running time. Music this intense should be experienced in short bursts, and may be best suited for EPs.

Meghan O'Neil did not explain her reason for leaving Punch, but there did not appear to be any acrimony. In this era of constant reunions, it's hard to get too worked up about another band calling it quits. If They Don't Have to Believe is really the end for Punch, they can say they went out on a high note.

Moose Blood: I'll Keep You In Mind, From Time to Time