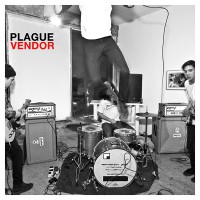 Epitaph has been straying from the punk-mold. And you know what? It's been working wonders for them. There. I said it. Joyce Manor and Pianos Become The Teeth are two bands who offer a stark contrast into their world right now, but it does show how bold and how much range they'd like on their roster. It took me a while to ingest what they were doing, but one of the items that kickstarted my appreciation is Plague Vendor. In terms of the various sub-genres of punk, ranging from pop to dance to psychedelic to '70s brit-punk, these California natives have mixed and matched a really fucking wild record in Free To Eat.

"Cursed Love, Hexed Lust" is the best snapshot of the band. Brandon Blaine as a vocalist has often said he's more embedded in hip-hop than anything else. But, that's hard to believe, given that his work sounds like it was made in a cauldron of Jack White, Anthony Kiedis and The Strokes. This track paints him like a preacher, like someone possessed, like someone manic, like someone whose enthusiasm borders on psycho. And you know what? He's scary good and you're left loving it. This is especially seen on the screeching Cali-surf-punk banger "My Tongue Is So Treacherous ".

The musicianship backs him up well and is fit for fans of ATDI and Comadre, among the few. It's so intricate and exquisite in its own noise. At times, the album does come off a bit repetitive but you can't deny how hard-hitting the tracks are. Sharp hooks, confrontational picking, rasping basslines and fervent kitwork all cultivate a very powerful atmosphere. "Seek the Ruby Scarab" is another little gem that seems to be finely melted down from a garage-sound, demo-esque production into Epitaph's stable of appreciably-polished tunes. When all's said and done, you're gravitating to Blaine's vocals and his spirit, but as a whole, the energy and raw passion of Plague Vendor is more than enough to win you over and leave you wanting more. Under-the-radar? Yes. And it deserves to be making more waves. Recommended highly.

The Arrogant Sons Of Bitches: This Is What You Get