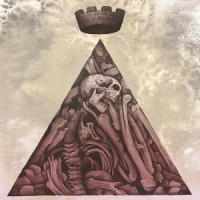 I withdraw my question.
February 6th 2015

Doomriders may just be a side project for Converge guitarist Nate Newton, but this secondary band has been around for a decade, and has released two incredibly fun, metal injected albums. Enjoyment comes from genre riding, a balance of metal, hardcore, sludge, and stoner rock, while not diving overtly into one of them. This mix makes for wanting to head bang, mosh, and vibe out, all at once. Doomridersâ€™ third LP, Grand Blood, strays from the normal routine, putting focus on the heavy metal side, creating a slower paced, bludgeoning sound with sharp upticks.

Grand Blood starts with a 24 second introduction track, leading into another build up on â€œNew Pyramids,â€ showing off serious drums rolls, accompanied by ominous guitars, and Nate Newtonâ€™s altar bashing declarations. From here, songs begin to pick up speed, throwing in short, technical riffs, and particularly bellowing vocals, like those on â€œMankind.â€ After a few fast songs in, however, the album hits a lower speed limit, and most tracks stay at a consistent, slower pace.

While Black Thunder and Darkness Comes Alive gave numerous anthem fueled singalongs, Grand Blood lacks them, besides the â€œBad Vibesâ€ punky chorus, â€œgimme, gimme; gimme, gimme; gimme, gimme bad vibes.â€œ The absence may make for better, complete songwriting, but, still, they are missed. The decline in hardcore and, to an extent, sludge and stoner rock, result in a more straight forward metal album, compared to past material; â€œGone to Hellâ€ going so far as to adding unexpected melodic vocals.

Grand Blood has the ability to separate the hardcore fans from metal fans, between songs under and over three and a half minutes, respectively. There is no denying the bevy of brutal riffs and windy, dreamy, extra metallic bridges on this albums, playing well with the deep, rhythmic bass. Musicianship is up a notch, no doubt, but it comes at the cost of the rest of the genres Doomriders are typically known for including.