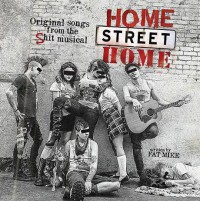 Fat Mike's latest endeavor, a punk rock musical, serves as yet another creative platform the NOFX leader has decided to smash the established rules and routines of in order to reshape them into his own ways of personal expression and connection. Home Street Home is the concept album that is a glimpse into the complete, fully staged theatrical production (with only ten shows in San Francisco scheduled thus far). It is exactly the musical you would think Fat Mike would write -- and splendidly succeeds in mixing emotional anecdotes with shameless drug use and sex acts, all pertaining to the tough daily struggles of the lifestyles of street kids.

Home Street Home is an awesome display of collaboration, as the songs truly embody the subject matter they describe -- the pain of being young, lost and lonely, the joy of breaking free from society, from abuse and neglect, and the empowerment of finding yourself, home and hope for the future in new friends. Fat Mike wrote all the music, and for the lyrics, employed two award-winning writers from drastically different areas of entertainment -- Jeff Marx (composer of Broadway musicals) and his girlfriend Soma Snakeoil (director of adult videos). Vocalists who provide representations of the characters on the album include Matt Skiba, Frank Turner, Stacey Dee (Bad Cop/Bad Cop), Lena Hall and the late Tony Sly; members of Descendents, Old Man Markley, Lagwagon and several other punk bands also lend their talents to the eclectic production.

Because of its wide range of contributors, Home Street Home is a uniquely detailed and witty work of acceptance and freedom that so accurately represents its nomadic family of teenage runaway punks. "Monsters" opens up the album, as it introduces the main character, Sue, a 16-year-old who is tired of parental reassurances of safety while she is in desperate need of salvation from her suffering alone. The song's three distinct parts -- an acoustic lullaby/cry for help, a faster, louder punk prayer, and a breakdown back into eerie keyboards and soft strumming -- poignantly portrays Sue teetering between suicidal thoughts and plans for escape.

From this excellent first number comes the revealing of some of the musical's cast of characters, Sue's future tribe: "Urban Campers" is an upbeat rock and roll song that straightforwardly outlines the pride and solidarity of "homeless" teens; while "Three String Guitar" and "Three Against Me" are sadder, more delicate songs as they look into the origins and outlooks of two of these runaways. "Fecal Alcohol Syndrome" is a standout track for its fast, bluegrass style with a gruff male vocalist telling his story of being "a newborn alcoholic with a fermented brain."

As Sue ventures into this new world of sex, drugs and rock and roll, she is met with fellow vagabonds equipped with a gritty yet perceptive sense of humor to help her fall into street subculture. "High Achievers" is a comically brilliant assertion of the undeniable relationship between drugs and invention/creativity. The ragtime tune lists a lot of famous progressive thinkers from all aspects of society, since "when everybody's doing drugs, it makes the world a better place to be." "Safe Words" is a funny punk song that perfectly maintains the jerky rhythms of Sue's awkward initiation into group sex -- complete with Urban Dictionary definitions and a catchy pop-punk melody.

The more tender portions of Home Street Home obviously cover Sue's metamorphosis from a caged, submissive member of society to a proud, strong deviant dropout. "I'm Suicide" is a powerful call to arms, complete with energetic drums and a hint of bagpipes, as Sue realizes how fucked up her existence has been, and how necessary it is to throw away all of it -- the patriarchy, religion, systematic obedience -- in order to rise again and start anew. "Seeping Beauty (Reprise)" is an absolutely beautiful portrait of that late night lonely moment of despair -- a simple, quiet piano melody accompanied only by Sue's vocals -- as her blood "drips like rain/a warm and perfect pain that gives release/ and inner peace."

The soundtrack of Home Street Home is striking for its ability to pull off an array of musical styles to fit the characters' fluctuating moods. When Sue ultimately overcomes, finally learning to live according to her own rules, she enters an episode of reflection. "Because I Want To" starts off slow, with a warm, soft xylophone and drum progression into piano again as Sue states "the rule of my life have turned into suggestion, and others are completely obsolete." Then a burst of punk rock guitar riffs and pounding drums ensues as Sue lists all the crazy things she is going to do, because "nothing's too taboo."

The album ends with a new take on the NOFX tune "The Agony of Victory," from 2009's Coaster. Fat Mike's vocals provide a sense of security, as he calls these wayfarers to follow him -- to just give in and celebrate life apart from society. The song, now put in context, ties the whole project together as it probably was its starting off point; though the musical's version is a bit too theatrical with its droning "na-na-nahs" at the end, it does complete the concept album in offering an understanding of Fat Mike's inspiration and ideology of street living.

Home Street Home is awesome for its storytelling capabilities, its powerful and fun musical diversity, and for its personal connection to its creators. Though the many contributors get lost in the songs, making it difficult sometimes to identify who is performing, it only stresses the point that these songs are meant to be witnessed live onstage. The concept album is an abridged version of the deeper, more thorough theatrical production; Home Street Home is enjoyable to listen to, but what it needs (obviously) is the opportunity for the story and music to truly come to life. And while it is also apparent that Fat Mike wrote the music and undoubtedly influenced the contributors' performances, this only adds to Home Street Home's power: this is purely his project, his production, his interpretation of what a musical should be. I can only hope to catch a performance of Home Steet Home in a theater someday.

Into it. Over It. / Kevin Devine: Live in Philadelphia