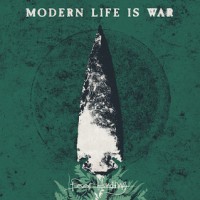 This is how you return from a hiatus. A full six years after their last record Midnight In America, September 2013 saw Modern Life Is War blasting back into the punk consciousness with their fourth full length Fever Hunting. While their debut My Love. My Way. borrowed heavily from American Nightmare, 2005's stunning follow up Witness provided the blueprint for bands like Defeater â€“ thinking man's hardcore for people who enjoy deeper lyrical content than "my town is better than your town and my crew could beat up your crew".

Befitting a band returning after a long break, and with two original members back on board - Matt Hoffman and Chris Honeck on guitar and bass respectively - more than anything else this is a record about time, about looking back and looking forwards. 70-second opener "Old Fears, New Frontiers" serves as a perfectly succinct (re)introduction, as Jeffrey Eaton screams the title five times over an insistent drumbeat and driving guitars.

Those four words encapsulate the themes that the album repeatedly touches on - reflecting on the past, how things have or haven't changed, and looking towards the future. In "Chasing My Tail", Eaton tells how "thoughts and visions from another time cloud my mind", while "Cracked Sidewalk Surfer" finds him having "shouting matches with father time about my former sins". In "Currency" he feels like "a broken record now / skipping for a decade now", and "Blind Are Breeding" has him "still screaming at the same walls I was screaming at five years before." Plus ca change.

Towards the end of the record Eaton seems to find some clarity, some ability to live in the present, with the realisation in "Currency" that "your friends are precious and they're slipping away / your time is precious and it's slipping away". Closer "Find A Way" brings things full circle, echoing the opening track as he declares that "the old fears are still here, still new frontiers are still waiting". It's a mission statement of sorts, an ode to "love and knowledge" and creativity. You couldn't exactly call it posi-core, but it's as upbeat as Modern Life Is War have ever been.

Fever Hunting is a stirring return. It never sounds stale or samey, as some songs go straight for the jugular while others display the slow build that songs like "Marshalltown" on Witness did so well. "Chasing My Tail" broods for a full three minutes, all discordant guitars and feedback, before the chorus kicks in and the lines "scrape and crawl to gain position / chasing my tail in the land of competition" become just a desperate repetition of "scrapeâ€¦ crawl". It ends in a squall of feedback that carries over into the next track "Media Cunt", probably the angriest song on the record and conversely one of the catchiest singalong choruses ("so so so so so sorry about youâ€¦").

There are elements of all three of the bandâ€™s previous albums here, but Fever Hunting is very much its own record. It doesn't pretend Midnight In America never happened, and nor should it, but it probably harks back more to My Love. My Way. and Witness. It fits the modern hardcore template that Modern Life Is War helped to create - no breakdowns, no shout outs, no tough guy posturing, just killer musicianship, and vocals and lyrics that walk the line between defiance and despair - but there are a few surprises, chief among them the unexpectedly funky bassline that propels "Dark Water". Kurt Ballou's production is hard to fault - Tyler Oleson's drums especially sound fantastic - and while the slow pace of some songs means the band get fewer chances to really let rip, it only makes it more powerful when they do. While nothing here hits as hard as the finest moments on Witness, Eaton remains a great lyricist in a genre in which lyrics are too often trite and predictable. Fever Hunting doesn't reinvent the wheel, but it showcases a rejuvenated band, and it's a hell of a good listen.