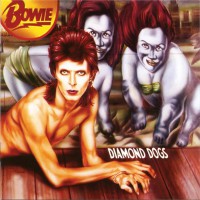 Diamond Dogs is famously one of the Bowie albums that's really for fans, and it's probably his most utterly distinctive work (even Low sounds like other art-rock albums of the time): melodramatic, raw, challenging, and ambitious even when crammed with catchy songs. And as he later noted it was extremely influential on the British punk scene in sound and scope. Bowie's violent, amateruishly scraping guitar playing here would be echoed in the late-70's post-punk bands and Diamond Dogs' concept of street gangs roaming London was echoed in the gleeful nihilism of the Sex Pistols. Notably Bowie made much of the album itself, including guitar and sax, and the musicianship here is unconventional, playful, a little off-kilter (one suspects Bowie was listening to Here Come The Warm Jets closely). Diamond Dogs is the goofy, abrasive place where punk and art-rock meet, dance a little, and depart.

It was never well-recieved by critics, probably because it was such a radical departure from Aladdin Sane and Ziggy Stardust, but Diamond Dogs took the rock-theater approach of "Rock n' Roll Suicide" and "Lady Grinning Soul" and ran with it. One of the important aspects of Bowie and the glam school was de-heteroizing rock n' roll and making it more dramatic, combining Elvis Presley with Judy Garland standards, and that's evident on the centerpiece "Sweet Thing/Candidate/Sweet Thing (Reprise)", a song cycle of vulnerability, sneering sex, curdling violence, and at the close effeminate, passionate need. It's one of Bowie's greatest works as a singer and he morphs from a crooning Sinatra to Lotte Lenya then a heartbroken Sandie Shaw. The music and lyrics here are a startling mix of dreaming piano, guitar, and mourning saxophone: "We'll buy some drugs and watch a band/Then jump in a river holding hands." Then "Rebel Rebel" follows and is there anything to say that hasn't been said? The best riff Bowie ever wrote on his own and a joyful coda to the glam rock world that would fade then emerge as the punk scene in 76/77.

The rest of the album by turns is changing constantly, veering from cheeky blues-stomp ("Diamond Dogs") to haunted showstopper ("We Are The Dead)" - more than his other work, Diamond Dogs is a reflection of Bowie's mercurial musical nature, never quite satisfied with one sound or idea, though the Curtis Mayfield-esque "1984" absolutely foreshadows the Philly sounds of Young Americans and would probably be more of a hit if it was't so gloomy and apocalyptic. "Big Brother" and the extremely fucked up "Chant of the Ever Circling Skeletal Family" sum up Diamond Dogs perfectly, poppy and dyspeptic than deeply unsettling.

As a Bowie fan I'd give this 5/5, but the music writer in me might knock off half a star- the music is not always as strong as the aspirations behind it and "Rock n' Roll With Me" is a pretty tedious soul song. But Diamond Dogs is essential for those who want to go deeper into Bowie and for amateur music historians eager to find early sources of punk. Bowie would do better albums in the future, including the masterpiece Low and the glorious Station to Station, but he'd never make an album that was so obviously his own again (Bowie is notably one of the great collaborators of pop music). When you listen to Diamond Dogs, you're immersed in a cruel, romantic, and feral world, one that at it's worst you still don't want to leave.