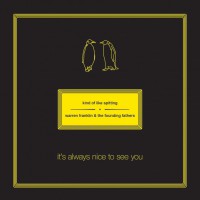 This is one of those black and white splits with both bands in stark contrast to each other but still mixing well to give a strange, somewhat cohesive piece. It's stylistically odd but still satisfying because it's 13 songs in total and gives a good account of two bands that are here to remind you where they're at. It feels like value for money as opposed to a two-tracker or a four-tracker which personally gives Itâ€™s Always Nice to See You leeway when it comes up short musically.

Opening with the acoustic and out-of-key "Parasite Song 1" is a gamble for Kind of Like Spitting. It's one of those false markers that doesn't prepare you for the indie, fuzzy and distorted trouble to come. Fit for fans of Japandroids, Dinosaur Jr. and Superchunk. The lo-fi drama that "Stress Cadet" produces lends a lot of credence to why fans in the indie sub-genre have been clamoring for more from these guys. A cover of Elvis Costelloâ€™s "Whatâ€™s So Funny â€˜Bout Peace, Love, and Understanding?" does come off sweetly as well to build more of KOLS's warm appeal - and to be honest, it washes away "Parasite Song 2" which follows in the same vein of its predecessor's drab tone. Overall, fans would be more than happy these guys reunited because you sense they still got the magic, minor flaws aside.

Warren Franklin & The Founding Fathers churn out the stronger half of the record, just like they did with their Mikey Erg split. Their take on power-pop-punk is very smartly done and done heart on sleeve. Tons of emotion to flavor tracks like "You're Settling" and "Lonely Enough". The latter's really grounded - heartbreak eloquently translated into soft alternative/emo tones and ultimately, what really wins is how they seem so comfortable in their skin. This is the kind of material that leaves me craving a full-length. "Rest Your Head" is the ballad that really reins things in and helps to leave a lasting mark which shows something more than tested waters or achieved potential. It shows this band is ready for the big game.

If you picked this up, you're getting your money's worth because there's a band that you're happy got back together and there's a rookie that's writing their name in the sand and knocking on your door. Most of all, both complement each other and flow uniquely despite their varying styles. Recommended on a warm Sunday afternoon!

The Tuts: time to move on