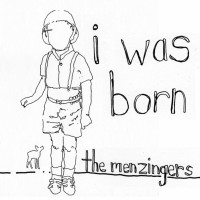 Believe it or not it has already been five years since Red Scare Industries released I Was Born as a digital EP on March 16, 2010 and Chamberlain Waits on April 13, 2010. Since then The Menzingers have released two excellent albums on Epitaph Records, toured extensively all over the world and exploded in popularity. In celebration of the five year anniversary of the I Was Born EPâ€™s release and Record Store Day 2015, Red Scare Industries has decided to get this EP the pressing on vinyl that it so rightfully deserves.

On the A-side there is the title track. â€œI Was Bornâ€ is a powerful and anthemic song that has become greatly associated with The Menzingersâ€™ early sound. The track is power chord-heavy, while the sprinkled with a high-pitched lead guitar riff. Both Greg and Tomâ€™s raspy voices switch off between lines during the some of the verses and join together to form that big and inspiring, sing-a-long chorus that so many have come to know and love when they see the band live or blast the song on their stereos.

The B-side has two melancholy sounding and emotion-filled acoustic songs, both of which did not make it on to Chamberlain Waits. â€œMea Culpa Cabanaâ€ is the softest and the shortest of the three songs where the lyrics seem to purposely contradict each other like â€œPast loves and awful decisions/Do one thing and say another while.â€ â€œMy Friend Chrisâ€ is a song that lists the stories of misbehavior that was mostly influenced by the narratorâ€™s friend. The stories range from teepee-ing houses with toilet paper to drinking alcohol while under age for the first time and lying about their shenanigans when they got caught. As you listen to this song you can really hear the sadness and regret in Gregâ€˜s voice as he recalls each story.

The I Was Born EP is a staple in The Menzingersâ€™ discography. Itâ€™s an important look into their pre-Epitaph work. The B-side especially shows the other side of The Menzingersâ€¦their darker and acoustic-based side. The fact that this great EP has finally been pressed on vinyl will make a lot of long-time Menzingers fans very happy.

Modest Mouse: Strangers to Ourselves