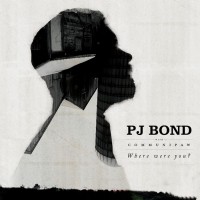 PJ Bond's always been a low-key act and an underground gem at that. His albums pass the time like a mash-up of Derek Archambault (Alcoa, Defeater) meets Ben Nichols (Lucero) with several influences colliding- country and folk influences primarily. Where Were You? follows in the same mold but dials back these presences to facilitate a more open ebb and flow to his acoustic style and overall, heart-on-sleeve energy. He incorporates a few more influences and churns out another honest and vulnerable narrative that fits his identity nicely. Bond continues to be lyrically astute and very relatable, which makes his music hard to ignore.

The oohs on the opening "Everglades" testify to this as he reduces the folky bits that may have oversaturated his audience in the past. This song, like most of the album, invokes heavy nostalgia and comes off more retro than anything else, stating what he feels about the past and commenting a la his diary (which must be large given his extensive touring). Bond's music seems to come straight from memories on the road but this time around, his lyrics are less roaming and seem more focused, honing in on the concept of home. The production is a mixture of high-texture, richly polished jams as well as demo-esque tunes, striking a great balance for a set that comes off catchy, singalong, wispy and head-nodding. These moments are built with a myriad of pianos, strings and jazzy bits and pieces splicing in. Case in point, "Calm In The Corner". Like I said, he infuses a lot which should appease folks who called him one-dimensional in the past.

The cadence in his voice cracks with emotion and continues to aid his inviting disposition. This is displayed on acoustic-based tracks like "For J" as well as "Hellfire". They're deeply personal and what's notable is how he's learnt which acoustics need percussion (for impact and drama) and which ones don't. It keeps things fresh and reduces the risk of being a one-trick pony. That still doesn't prevent a few tracks from coming off too repetitive or drawn out but overall, Where Were You? stands tall as one of his strongest expositions about his character and experiences. There are a couple forays a la skate-rink jams as the icing on the cake with "'87 Broadcast" and "The Better Option" adding to his hearty nature but with a more upbeat and infectious vibe.

As the album winds down, the second half is less electric and tempered down to bookend things as only Bond can. Everything starts to come together as a well-worn novelty and depending on your mood, it's one that'll probably take a couple listens to sink in. The closer "We Were Just Kids" amps things up to end on a high rock-ballad note and through this, you can visualize running down to the river as summer ends, jumping on the tyre-swing or the rope into the river. It's a very earnest and fun jam and a great one to wrap on. I've heard a lot of criticism that his studio work lacks energy and comes off drab as opposed to his exciting live shows and I'll be the first to admit that there's some validity to that. However, album-wise, Where Were You? is poised to rectify these jabs. Take note of Bond if you haven't before. Write it down.

Dany Laj and the Looks: Word On The Street