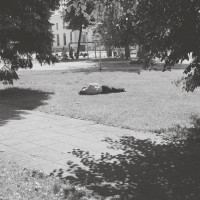 New York post-hardcore outfit, Self Defense Family, have come in for a lot of heat recently with tags like 'pretentious' and 'boring' being thrown their way. I see them more as cryptic, abstract and artistic. I like how they explore, take risks and experiment alongside vocalist, Patrick Kindlon's expositions on life. His pained lyrics and the anxiety in his delivery are what first drew me to them as well as his other work with Drug Church. As a frontman, a lot of messages do feel elusive at times, and I'll admit that it's either black or white with SDF. You either love them or you don't, there's no in between. That said, Heaven Is Earth feels like a bump in the road for them and doesn't possess enough vibrancy or energy to keep you interested for too long. It's not bad but it's definitely missing the sense of urgency and impetus of Try Me.

The latter record, along with the Duets EP in 2014, all told stories in a more comprehensive and complete manner. The same for their recent 7" with TouchÃ© AmorÃ©. Unconventional but impactful. This record, however, lacks said sting. There are too many moments that feel like middling material and give the impression that the band's run its course as unique and inventive. We've heard a lot of what's on offer already and things feel a bit repetitive. The twangy, melodic-picking opener, "In My Defens Self Me Defend" doesn't kick things off well at all but given how peculiar they arrange their records, it's not enough to throw you off. Fair. But the subsequent tracks continue to feel evasive and non-gripping, leaving you wondering where's the collusion of sounds a la their older albums.

You can sense the purpose, as usual, in Kindlon, but you do feel lost. Even the instrumentation (which usually you'd expect to salvage their bad tracks) don't even feel like they're building to climax. These subtle complexities in their musical structure often stood tall. Now, not as much. Case in point, the self-titled track, which is twinkly and evocative, but desperately misses a huge sprawl and explosion at the end. These exclamation points are what helps Kindlon's words/themes hit home but sadly, they never come.

As for the positives, well, if you're a pure rock and roll fan, or looking for some modern Rolling Stones-esque stuff, you'd probably enjoy "Everybody Wants a Prize", which keeps a sense of introspection but harbours the buoyancy of what you'd expect from SDF. There are tracks on tap though that as low-key and low-tempo as they get, still register pretty well (such as "Basic Skills") which makes you wonder why they didn't apply this drive to the rest of songs, which feel flat. As things close, you're reminded that SDF have always been on the verge of something bigger. But this album, which should have been a major step forward, is actually two taken back. It's too minimal and bare-boned to evoke any emotional jolt from the listener and that's a big miss for a band which usually effects such, quite easily. They barely elicit any reaction here and that's why Heaven Is Earth, amid my huge expectations, feels like a big disappointment. However, like I said, it's a minor bump. If it's anyone who can rebound quite easily from this, it's these folks...