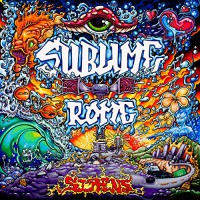 In the 1987 cult classic Stepfather, a young woman has to come to terms with the man her mother married after her father's death. Since this is a cult classic we're talking about here, of course this new stepdad is a murderer. Pretty solid movie. Check it out if you can.

Anyway, 13 years after Sublime singer/songwriter/guitarist Bradley Nowell's death, Rome Ramirez started playing with the two surviving members of the band (Eric Wilson and Bud Gaugh). They initially performed under the name Sublime, but changed it to Sublime with Rome after some legal action. Does Ramirez have the same bad intentions as the murderer from Stepfather? Of course not. He's simply trying to fill in for Bradley Nowell, doing his best to replace the attitude and personality that defined Sublime. And he's really, really bad at it.

However you may feel about Sublime, Bradley Nowell's voice and lyrics pushed Sublime's music above standard white boy Reggae. Yeah, it attracted a fair share of backwards visor wearing frat boys, but it would be hard to say Nowell's laid back charm didn't have a certain appeal, with his flippant lyrics and propensity to dodge back and forth between Spanish and English. On Sirens, Rome Ramirez offers bland vocals and safe melodies, reaching new heights of forgettability with every song.

The title track serves as a microcosm for the whole album, as it's Reggae influenced by 311 and Pepper rather than Big Youth and Peter Tosh. "Sirens" also delivers the most cringeworthy rap verse this side of Gym Class Heroes. The band is clearly reaching for the Top 40, which isn't necessarily a bad thing, but since Sirens lacks anything resembling a personality, it all sounds like hollow meandering. At best, the album is genteel background noise. At it's worst, it's a turgid reminder that this band is an overproduced cash grab.

"House Party" has the seemingly required marijuana references that the album's target audience will be craving. This track is one of the album's lowest points, playing out like a Fall Out Boy b-side on quaaludes. "Promise Land Dub" lasts a painful five and a half minutes of synth addled dub stretching. "Best of Me" and "Run and Hide" both take swings at Bad Brains-esque punk and whiff horribly. "Run in Hide" has more in common with P.O.D. than I Against I. The album closes with "Gasoline", a harmless sounding Rocksteady exercise that would be much better off as an instrumental. Though, I guess that rings true for most of the other tracks as well.

In hindsight I would not have used the name. I didn't want to in the first place, I was talked into it and I would like to apologize to certain people and the fans for trying to justify or talk them into it as well.

That's Bud Gaugh expressing his displeasure with his (now) former band Sublime with Rome. Â Some of us no doubt share his sentiments (though many would probably be a little more extreme when expressing their thoughts). Sirens carries that uneasy feeling Bud is describing throughout it's running time. Thankfully that running time is a short 33 minutes, which is about 1/3 the length of Stepfather. Â So, let me reiterate: Homicidal new step dad = a pretty good movie. Boring new vocalist = Â a pretty boring album.

Aaron West and The Roaring Twenties: We Don't Have Each Other