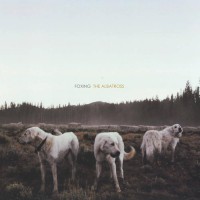 I don't often backtrack in terms of reviews but I've been immersed in Foxing for the last couple weeks. Always been a fan but really into them at present. If you're familiar with them, you know how insightful they are into wading into those fleeting and significantly sad years of our youth. Splits and singles could have told their story but if you want the full details, you want The Albatross. It encompasses many emo tropes that bands like The World is a Beautiful Place..., Dads, empire! empire! etc would boast in terms of that feared 'revival' label but as with the lot of these groups, Foxing litter your ear with sentimental leaves and beautiful poetry via very realistic storytelling. Diary-like. They're one of the more discerning and disarming indie acts going around and this album is the main reason why.

It's warm, light and fluffy at all angles, something they've never understated. They capture the charm of the juvenile days through loopy choruses, twinkly guitars, spaced out/subdued/distant vocals and with all these, let me just say they scatter them like a band on the verge of tears. "Rory" stands out as the most inherently engaging track on offer. In fact, it's stunning. It's genuine, dramatic, yelpy and a heartfelt confessional. And yes, it's all about unrequited love. Conor Murphy's delivery is pained and perpetuates best in the band's simplicity. A haunting set of keys, a horn-laced plea, his blunt lyrics, distorted guitars and one-thumping percussion build the sad ebb and flow of desperation. It's strained yet roaring and emotive to say the least. Reminded me of when Cedric went apeshit crazy for ATDI. It's this track that had me using words like 'irresistible' and 'on the cusp of greatness'. But that's not all they do. You've got nice ambient spots of post-rock and math that lend to Foxing's diverse tapestry. Confident, assured, experienced but still rough around the edges.

"Inuit" displays a swelling, goosebump-inducing build which even the interludes copy to show how tense but moving Murphy wants proceedings. Foxing even jam a jazzy/math/Dance Gavin Dance style out in "Bit by a Dead Bee pt. 1" with snappy solos conveying their emotions to a screamo/gang-vocal backdrop. Reminds me a bit of Tiny Moving Parts as well. That aside, they own a pretty intriguing dichotomy on this album (remixed and remastered version from what Count Your Lucky Stars released in 2013). Cliches in their crooning melodic, twinkly, sporadically finger-tapped guitars are well augmented by minor orchestral flourishes that add an intimate echo-chamber to their tracks. It's definitely for ruminative settings and fireside listening. "Den Mother" is another track that shows their indie ambition with a trebly glance and more horns jammed into their shimmery style of play. What's even cooler is that these songs feel like anguished ballads which you clamour as acoustics. And they've done just that over the past few months illustrating just how striking, compelling and intricate the songs can be when deconstructed. Each song transitions logically into the next as if the record's one big song broken down. It feels thematic and conceptual which I connected to another act I'm loving more with every listen and that's Sufjan Stevens. There's a similar honesty and musical structure on quite a few tracks.

Foxing pride themselves on memories and impressions, on prickly pathways, on jarring affectations and on the fact that we're always skewed or leaning to the sadder aspects of life. The Albatross is all about this realization and human nature's inclination to wander aimlessly. Most of their music is about lifting this veil and drowning yourself in reality and Foxing make that definitive statement here, like it or not. The album harps on us running free in the wild, being hunted and haunted by tragedy but through it all, they encourage us to forget the discomfort and adopt a positive demeanour. The closing track "Quietus" reignites that fire of hope and shows that for each challenge, there's a trigger inside us to overcome. As erratic as Murphy sounds, his anxiety is something I relate to. It prods, provokes and lingers. Pushing boundaries. And I'm sure a lot of emo bands are wary but glad that Foxing wield this power. The album's nothing short of tortured and gripping but even when it takes a casual footing, your head's buzzing. Their music always lurches to that musical nucleus which appeals to our inner and most basic instinct - the desire to be loved. While you shrug at this notion, let me end by redirecting you to "Rory."

Staring Out The Sun: Break The Silence [EP]