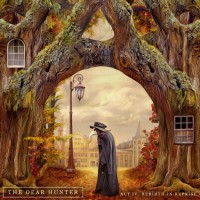 The Dear Hunter's always been an intriguing music-maker. Casey Crescenzo has used it as a vehicle to get more imaginative and much more creative than The Receiving End of Sirens allowed and it's been a fun-ride hearing him express this artistically. Act IV: Rebirth in Reprise continues this descent into his mind and feels familiarly explicit, especially riding the wave of a back catalog and live albums, that possess a lot of character and not to sound cheesy, a lot of pizzazz. This record ends up being the band's most commercial and most accessible, definitely seeming geared towards mainstream success, but a lot of it feels like TDH's version of elevator music, toying around too much and lacking cohesion at times. It's a risky formula that's always worked in the past but this time, it doesn't feel as fluid.

You get a lot of folk, pop, indie, jazz and so many other elements that you're accustomed to. They keep a lot of their old essence despite the risky elements of the album and balance a lot of it quite well. The hum of organs on "Waves" is a great example of this. You feel an authoritative stamp a la labelmate, Max Bemis' last outing on Say Anything's Hebrews with other parts popping a la Andy Hull (Manchester Orchestra) and All Get Out. Hell, there's even some Coheed and Cambria sprinkled about as you get acquainted to TDH's quaint, eclectic vibe. Then there are the cartoony tracks like "Rebirth" and "A Night on the Town" -- mysterious and noir-ish like they're auditioning for a Pixar movie but things still feel so loose and lacking energy.

There's not enough to grip and engage you here but when the momentum lags, Crescenzo flexes his vocals (and note, he's really outstanding throughout. Consistently!) to breath huge volumes of life into songs like the piano-driven "Remembered", reminding you that no matter what, versatility in musical range is what TDH prides itself on. Tracks like the latter are more focused and packed with intent. Shame there wasn't more of this on tap. Ultimately, Act IV: Rebirth in Reprise addresses a lot of its predecessors music-wise but it still feels short-sold at the end. Not a bad album but one that requires a few more listens, personally, to really feel captivated. The band seems to be going through the motions here and it doesn't stick as much.