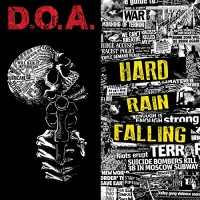 D.O.A. is probably the most important Canadian punk band of all time, and Joe â€œShitheadâ€ Keithley is the mastermind and sole constant member. He is Canadaâ€™s answer to Joe Strummer and Jello Biafra all rolled up into a single lanky, beer- and hockey-loving package. Keithley has also always been a little bit Bob Dylan. The most enduring D.O.A. tracks are essentially revved up protest songs. Even the title of the new LP is an obvious nod to Dylanâ€™s 1963 classic â€œA Hard Rainâ€™s A-Gonna Fall.â€ Hard Rain Falling is chocked full of timely, topical songs that could easily have been ripped from todayâ€™s headlines. Or the headlines of the 1960s. No one could accuse D.O.A. of pandering to the current political climate. Most of the subjects covered here have been staples of their material for years. Itâ€™s as if the world is finally starting to come around to Keithleyâ€™s way of thinking.

The first thing we hear on Hard Rain Falling is that familiar voice shouting â€œYouâ€™ve gone, gone, gone, gone, gone too far!â€ The opening track is one minute and 15 seconds of vintage D.O.A. Itâ€™s a Chuck Berry-style riff with that familiar overdriven but not totally distorted guitar sound. The shouted, repetitious chorus drives the point home. Like a lot of modern punk recordings, the lead vocals are probably a little too loud in the mix. (Clear your throat, Joe.) I suppose itâ€™s better than the buried lead vocals of many early '80s punk and hardcore recordings, but the balance could be better. On â€œPunk Rock Hero,â€ Keithley gives some fatherly advice to the next generation of aspiring anarchists. â€œThe Cops Shot a Kidâ€ is exactly what youâ€™d expect for these troubled times. â€œWarmongerâ€ references Vietnam, but itâ€™s as relevant today as ever. â€œJohnny Too Badâ€ is D.O.A.â€™s take on reggae, complete with organ. It also adds to the punk lexicon of â€œJohnnyâ€ songs. â€œPipeline Feverâ€ decries the environmental damage done by big corporations.

â€œRacism Sucksâ€ has an obvious message but is extremely catchy. â€œKicked in the Teethâ€ adds some tasty bagpipe and Celtic flair to the mix. â€œNot Gonna Take Your Crap No Moreâ€ and â€œHe Joined the Gangâ€ are classic sounding D.O.A. songs. Things wrap up with a cover of â€œSan Quentinâ€ from Johnny Cashâ€™s legendary 1969 live album At San Quentin. The Man in Black and Joe Shithead might seem like odd bedfellows, but the two men might have more in common than you think. At the very least, they were both concerned about the plight of the prisoner. Hard Rain Falling is exactly what youâ€™d hope it would be. Itâ€™s 12 songs in 29 minutes without an ounce of filler.

Hard Rain Falling is D.O.A.â€™s 16th LP, and Iâ€™m happy to report that Keithley still has plenty of fire in his belly. For nearly 40 years, heâ€™s been the voice of righteous political dissent, and shows no sign of slowing down any time soon. He even manages to confront serious issues without being humorless, an ability that seems to elude too many modern bands. Even as he flirts with a political career, (How great would Prime Minister Shithead be?), the music remains true, strong and free. If youâ€™ve been living under a rock and have never heard D.O.A., you should probably start with Something Better Change or Hardcore â€™81. For the rest of us, Hard Rain Falling ranks right up there with the very best of the bandâ€™s 21st century output.Â