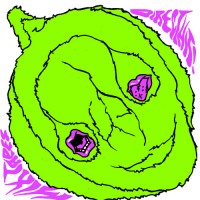 Believe it or not it has been just about five years since this criminally underrated and overlooked split EP was released â€“ November 9, 2010 to be exact. This is one of those rare splits where both bands at the time of its recording were fairly unknown and then became relatively big players within the pop-punk realm later on. For this release Mixtapes and Direct Hit! contributed one song each and then covered each otherâ€™s song.

On the A-side is Direct Hit!â€™s song â€œWerewolf Shame.â€ This is one of the early instances of Direct Hit!â€™s signature angry sounding pop-punk. The first thing that is noticeable is the mixture between the distorted guitars and the high-pitched synthesizer riffs. Lead vocalist Nick Woods is backed up by what can really only be described as a â€œwallâ€ of backing vocals during choruses, but masterfully sings (almost screams) the verses on his own. The most impressive part about â€œWerewolf Shameâ€ is the walking guitar solo - the bends, the pull-offs, the octaves â€“ this is excellently played and written. You donâ€™t get too much of these kinds of solos in Direct Hit!â€™s other material, let alone pop-punk in general. This is just a really special track overall and the band still plays it live even to this day.

Direct Hit!â€™s cover of Mixtapesâ€™ song â€œI Was A Teenage Poltergeistâ€ sounds exactly like it could have been a track on Domesplitter, or for older fans #4 or #5. In other words, the band took this song and completely made it their own. Right off the bat you know it is Direct Hit! playing this song because Nick Woods counts it off with a loud â€œFUCK YOU! GET PUMPED!â€ a few seconds in. Also, the clearly changed the key and made the rhythm much more consistent than the original version. And DH! decided to take out the little lick in the introduction.

Mixtapesâ€™ version of â€œI Was A Teenage Poltergeistâ€ is a lot poppy-er and bouncier. Where Direct Hit!â€™s version was much more aggressive and rhythmically constant, this version is a little more laid back. Instead of just one lead vocalist, both vocalists on this track switch off singing line and then come together to sing the choruses. There is also a much more identifiable main guitar lick that is not present in Direct Hit!â€™s cover.

Now just like Direct Hit! made their cover of â€œI Was A Teenage Poltergeistâ€ their own, Mixtapes did the same. They too changed the key of the song and just like in â€œI Was A Teenage Poltergeist,â€ the lead singers switch off singing lines and sing the choruses together. The main riff that you hear in Direct Hit!â€™s version is much harsher than the one Mixtapes wrote. Instead of the high-pitched guitar octaves and keyboards, there are no keyboards at all here and they just stick to playing lower notes for the most part, but they wrote it so that it is still recognizable and somewhat related to the original. Mixtapes also completely rearranged the guitar solo. At this point the band slows the song down quite a bit and then both guitar start to harmonize as they build the speed back up.

Looking back at the five years since this split 7-inch was released its safe to say that it was a precursor that led to both of these bands becoming very popular in the punk scene. Direct Hit! released several EPâ€™s after this one as well as full lengths like Domesplitter and the amazing Brainless God. They even rerecorded â€œWerewolf Shameâ€ for their More of the Same (Satanic Singles: 2010-2014), which came out this year. And even though Mixtapes are on hiatus and have been since Fest 13, since this EP came out this band wrote some great pop-punk records like These Are Us, Ordinary Silence, and a bunch of others.

Interestingly though, Direct Hit!â€™s line up has changed quite a bit since this split came out. Donâ€™t believe me? Take a look at the very amusing split music video both bands made for it.

500 pink copies of this 7-inch were pressed for the initial release and another 50 black test pressings were sold at Fest 9.Â

Minus the Bear / Murder by Death: live in Boston

All Time Low / Sleeping With Sirens: Live in Grand Rapids