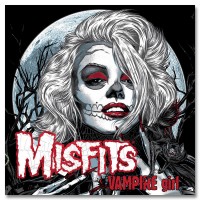 Thereâ€™s no question that The Misfits have had pretty much the same sound since their reincarnation in 1997 when American Psycho came out. The thick distorted guitars played with Johnny Ramone-style strumming, borderline moaning lyrics about murder and monsters, and intense drums gave the band a new sonic identity to go along with the new line up. But that was a long time ago and a completely different band. Donâ€™t get me wrong, I think American Psycho is a great record, but to keep that same sound pretty much consistent through out the years has arguably made The Misfitsâ€™ newer releases since then very â€œhit or miss.â€ For most of you Misfits â€œpurists,â€ Iâ€™m sure a solid majority of these releases have been â€œmisses,â€ but thatâ€™s neither here nor there. You are however, acknowledged.

We are not far away from coming up on American Psychoâ€™s twentieth anniversary and the three-piece, Jerry Only-fronted Misfits continue to double down on deriving much of their material from that albumâ€™s overall sound -- this 12-inch single included. But thereâ€™s something noticeably different with the Vampire Girl / Zombie Girl single, its very laid back and almost gentle. These two songs have a lighter version of the American Psycho sound -- â€œdietâ€ American Psycho if you will.

â€œVampire Girlâ€ is a clumsy Misfits tune to say the least. They completely abandoned the Johnny Ramone, down stroke strumming and replaced it with a mid-tempo picking arrangement. It has a very watered-down feel to it. There is also something you donâ€™t typically here in Misfits songs and that is a wailing guitar solo, which goes on for way too long and just comes off as over-the-top and a bit cringe worthy. Though they also seem pretty tame, Jerry Onlyâ€™s vocals are still a notable factor here. He sufficiently proved that he could be a solid lead vocalist after they released their cover of â€œâ€œScience Fiction/Double Feature.â€ But a good lead vocalist needs good lyrics and that is where this song also falls apart. Lyrics like â€œTake my heart, take my hand/ And Iâ€™ll go with you I swear/ Yours tonight, for all time/ Iâ€™ll be right there by your sideâ€ are just cheesy and pretty lazy.

Of the two songs â€œZombie Girlâ€ is a much more traditional â€˜90s era Misfits song. But you need to endure the very clichÃ© intro where Jerry softly narrates an excerpt of some story while guitars play sharply distorted licks in the background. Once those long 45 seconds are over, we again get this atypical and overdone guitar soloing like in â€œVampire Girl.â€ However, â€œZombie Girlâ€ is a bit less reserved. Jerry Onlyâ€™s vocals are a bit more aggressive and down stroke strumming comes back during this song. The chorus is where the song redeems itself a bit. The melody is pretty catchy and is a bit of throw back to their more anthemic tunes like â€œDonâ€™t Open Til Doomsdayâ€ or â€œSpeak of the Devil,â€ but it still seems like it could have been a weaker B-side off of Famous Monsters if it was written back when that album came out.

It goes without saying that if you compare these two songs to the Danzig-era songs and arguably the Graves-era songs, these two would barely make a â€œblipâ€ on the radar. â€œVampire Girlâ€ and â€œZombie Girlâ€ are not terrible songs though (they're not so great either). But do not categorize them as â€œhorror punk.â€ If anything they are Halloween-themed, pop rock, love ballads. Nothing more, nothing less. I feel like I have been pretty lenient with the later versions of The Misfits, but there is just no way you can give them a pass on this single. There are probably a few of you reading this that are cringing at the fact that I even had to compare this new release with the Graves-era Misfits. But is there really any comparison to the Danzig-era catalogue?