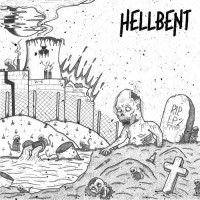 Hamilton Ontario's Hellbent seem to bring out a heavy dose of hardcore in their latest EP entitled, well, EP2.


The tracks are short but heavy and bring out their message quite clearly with numbers like "Washed Out"Â detailing the pressures of living life and whatnot with a notable line in the chorus going by 'My aspirations seems to only want me at my weakest'. A nice touch to an already tried and tested method of hardcore and metal music songwriting.

Bastard, the longest track off the whole EP, doesn't waste time in blasting straight into your ears and definitely delivers the knockout blow to this whole release. The raspy vocals hit all the right spots in the track, with the band delivering a tight backing section and going through the all too familiar formula of modern hardcore. Breakdowns are plenty and give the track a cool, almost end of the world feel especially with the eerie circus type music at the end of the track and in effect the whole EP -- kind of something you'd expect to hear in some abandoned carnival circus with creepy clown rides in the middle of the night.Â

For a self-recorded release (by the band's drummer actually), this has some real solid production on it, considering it was recorded in less than a week. To be fair, there are no complex arrangements with the instruments on the recordings so it's understandable why recording was quick but on the other hand for an unsigned band to self-record, self-release and do their own tours is still quite an impressive feat (but not unheard of) from a group in Southern Ontario.

Musically speaking, they're nothing that we have not heard before from other bands from the area (I'm looking at you Cancer Bats and Straight Reads The Line) but they're still worth a listen for hardcore fans. Maybe changing their sound wouldn't be a good idea anyways but who knows, having a more distinct sound and songwriting could do wonders for many independent bands finding their ways today.


You can check out the EP here.