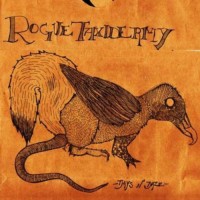 Far from unknown in the DIY scene, Houstonâ€™s own Days N'Daze returns with their sixth and possibly their most auspicious full length album. Even if youâ€™re not into the folk punk scene, the band's style (coined â€œThrash Grassâ€ by lead vocalist and oogle extraordinaire Jesse Sendejas) definitely separates them from some of their contemporaries. Very few gutter punk bands can appeal to a broad base of listeners, but these guys are one of them. Think Pat the Bunny but perhaps slightly more focused.

Of course the LP has all the dressings of a great folk punk anthology. It has its share of accordions, banjo riffs, washboard beats and even a kazoo solo for good measure, but there really is a little something for everyone. From the oogle anthem â€œRemnants of What People Used to Beâ€ ("Because now everyone smells fake. It's all perfumes and body sprays, we're just plastic, dolled up remnants of the human race") to the semi-morbid love song â€œBlue Jayâ€ ("As the dead robins strung across the morning dew, the blue jays oh sing a sorrowful tune. I'll never stop missing you. I'll never stop loving you.") beautifully rendered by female vocalist (and sister of aforementioned lead singer, Jesse) Marissa Sendejas. For those that donâ€™t like the gravelly, road-hardened voice of Jesse or the softer, more subtle stylingâ€™s of Marrissa, thereâ€™s â€œDazed From the Dazzle of Decadence and Constantly Reminded of Death,â€ a haunting instrumental, reminiscent of a song played by an old, abandoned carnival ride.

Thereâ€™s definitely an undertone of growing old and slowing down a little in a few songs like â€œDBSâ€ ("I'm not saying that we're old , I just don't feel that we're still young. After all this time that we've been lost. So go for broke and fuck tomorrow. Cheat and steal and beg and borrow") and â€œRockabilly Impending Deathfutureâ€ ("When did the face of a dying man replace my reflection"). Hopefully they arenâ€™t burning out. Following their Facebook page, itâ€™s easy to see how one could easily become road weary. Mechanical failures, last second venue switches, a constant, grueling tour schedule and the omnipresent bane of the skunk punk, hunger pangs, could cause anyone to wear down a little. â€˜Tis the life of a DIYâ€™er though.

If you like rail riding, homeless, crust punk, you will certainly enjoy the album, if not you can most likely still find something to suit your fancy. One of the more universally appealing songs (and my favorite) is "Misanthropic Drunken Loner." Start there and work your way around. The album is for sale at Bandcamp. Name your own price! Also, itâ€™s free to stream. So go give it a listen and if you like it, fork over a few bucks. Last I heard, all funds were going towards van repairs.

The Run Up: Scared of Everything