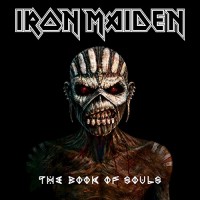 What do you do when youâ€™re the band thatâ€™s done everything? If youâ€™re Iron Maiden, you make the biggest and most audacious album of your 40 year career. The Book of Souls is an 11-track, 92 minute monstrosity. Itâ€™s as long as a movie and has far more plot twists than most. The closing track is also the bandâ€™s longest at a whopping 18 minutes. Iron Maidenâ€™s sixteenth LP and first (studio) double album is truly one for the ages. The expanded classic (six piece) line-up was bursting with so much creative energy that a single record (or CD for that matter) could not contain it. At some point, Iron Maiden must have made a conscious decision to make The Book of Souls huge. That choice could have been disastrous in the hands of a lesser band, but they pull it off.

The opening track of the six-song, 50-minute disc one is the extremely catchy Bruce Dickinson-penned â€œIf Eternity Should Fail.â€ The first 90 seconds of the eight and a half minute song is Dickinsonâ€™s voice and some sparse synth, before the familiar galloping bass of Steve Harris kicks in. The second track, the five minute â€œSpeed of Light,â€ was the albumâ€™s first single. Itâ€™s vintage Iron Maiden and seems destined to become a live staple. â€œThe Red and the Blackâ€ is disc oneâ€™s most bloated track at thirteen and a half minutes. Iron Maidenâ€™s songs have always told stories. This time around the stories just happen to be a little bit longer. All three guitarists (Adrian Smith, Dave Murray, Janick Gers) are in fine form here, as is drummer Nicko McBrain. The title track closes disc one with some heavy subject matter and a ten and a half minute run time.

The five-song, 42-minute disc two leads off with five minute â€œDeath or Glory,â€ the tale of a World War I flying ace. The guitar intro on â€œShadows of the Valleyâ€ is a bit reminiscent of â€œCaught Somewhere in Time.â€ Thereâ€™s one other (relatively) short five-minute song, the cool but unfortunately titled â€œTears of a Clown.â€ (No, itâ€™s not the Smokey Robinson Motown classic.) â€œThe Man of Sorrowsâ€ mourns the ones weâ€™ve lost. The Book of Souls concludes with the epic â€œEmpire of the Clouds.â€ Itâ€™s massive and piano driven and tells the story of the crash of airship R101. Thereâ€™s plenty of room for the band to stretch out on this album, but this song takes it to the next level. Itâ€™s interesting and ambitious, and has to be considered an artistic triumph. It also gives lots of fuel to those who have long claimed that Iron Maiden is a prog-rock band covered in a thin layer of metal. Their musical virtuosity canâ€™t help but shine through. The song does go a lot of places and has a bit of a '70s Yes or Rush feel.

Iron Maiden has always gotten a bit of a free pass for their artsy fartsy tendencies. Their songs are often based on classic literature or are mini history lessons. Maybe itâ€™s because of their awesome, iconic and ageless Eddie mascot. For some reason, itâ€™s always been OK to have an Iron Maiden patch sandwiched between GBH and Discharge on your denim vest. The Book of Souls pushes the limits of the songs, even by Iron Maiden standards. It stretches them out, but never really stretches them thin. Long intros, long solos, strange musical interludes and lots of words fill the 92 minutes. If youâ€™re new to Iron Maiden, you should probably start with The Number of the Beast (1982) or Piece of Mind (1983). (Hell, the two of them together are shorter than this.) That being said, The Book of Souls only adds to the bandâ€™s impressive legacy. Fans will ultimately get what they want from one of the most important bands of The New Wave of British Heavy Metal. More Iron Maiden. Lots and lots of Iron Maiden.Â

The Smashing Pumpkins: Mellon Collie and the Infinite Sadness