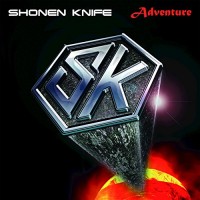 So here I am set to review Shonen Knifeâ€™s new full length, Adventure. But this isnâ€™t the easiest of reviews. And for a few reasons. First, itâ€™s always a bit more difficult to review a band whose catalog dates back to 1981. How does one write a review that isnâ€™t derivative, right? Second, itâ€™s also a little difficult to properly put a band like Shonen Knife into context. How does one stick to the review of a single record when thereâ€™s enough history to the band to really end up writing a small biography? And, letâ€™s be honest here, all of these problems are connected. But Iâ€™ll push forward regardless and do my best to accurately present you with Shonen Knifeâ€™s twentieth (or so) full length, Adventure.

The record itself is nothing all that new in terms of what Shonen Knife have provided listeners with for decades. Theyâ€™ve once again combined pop punk with Japanese pop culture to create an easy-listening bubblegum experience. I mean, itâ€™s literally cute. The first track and single, â€œJump into the New World,â€ is a prime example of Shonen Knifeâ€™s sound and talent. Itâ€™ll leave you singing the chorus in your head, but it will also showcase their suburban punk balance of melody and three-chord guitar riffs.

And then thereâ€™s the albumâ€™s sixth track, â€œTiny Green Tangerine.â€ This song is most truly what one would expect if Weezer made a childrenâ€™s album. The guitar work is simple and melodic, the hook is weird but oddly catchy, and it rocks with the power of a Tonka truck. It left me honestly wondering what to make of it.

But then thereâ€™s â€œIMI.â€ The opening guitar chords are brewed from a highly-caffeinated blend of mid-1980s speed metal and California punk. The entire song itself has the urgency and tone of a riot girl band. The leads bring in just enough melody to complement the uptempo speed of the song, and the chorus would definitely prompt a great sing-along. So thereâ€™s the punk ethos alive and well in these ladies, right?

And so therein lies my problem with Adventure. The women in Shonen Knife seem to purposefully teeter between their J-pop bubblegum cuteness and the melodic punk that garnered them the praise of a ton of American alternative bands, most notably Nirvana.

I look at it this way. If youâ€™re someone who needs to cover all of your bases in the musical underground, Adventure certainly isnâ€™t the worst introduction to these cult idols. If youâ€™re someone who fits the ever-growing demographic of punk-turned-parent, Adventure might be the album you and your youngster could get down with over some Capri Suns and Legos. And if youâ€™re a Shonen Knife purist, Adventure is probably best left at the end of the catalog.

Anthrax: For All Kings