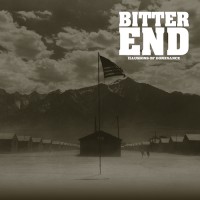 Illusions of Dominance is a great record, I find this release to be a breath of fresh air in a sea of contemporary hardcore mediocrity that seems to be everywhere in the scene these days. Bitter End have a back catalogue of impressive releases over their career as a band, progressing their sound from a slightly slower take on 80â€™s and early 90â€™s New York style hardcore in earlier releases and slowly integrating a more thrash crossover vibe that is very prevalent on Illusions of Dominance. I can be slightly cynical with hardcore releases as it seems that these days the scene is about to burst with bands that all sound similar, pulling out all of the same old tired tricks, but I think with this release Bitter End are solidifying their legacy as one of the few current bands of the genre that will be remembered and referenced by future generations of hardcore fans.

Illusions of Dominance was produced by Terror drummer and hardcore super hero Nick Jett (Backtrack, Terror, Down To Nothing), and was released last summer on Deathwish Inc. The production quality is everything that I had expected and more, it has all of the attributes that are required to produce an awesome hardcore/thrash crossover record. It has just the right amount of reverb to remind us all of how much we love Metallicaâ€™s Ride The Lightning, with all of the modern crunch and clarity that current metal and hardcore fans are looking for. It is the perfect mash up of nostalgia with a modern hardcore inflection that I think will please not only hardcore fans, but also people in the metal community that may take this album for a spin.

The vocal delivery is everything that you would expect from Bitter End, gruff but clear and definitely in your face. The lyrical content addresses the current power structure, military conflicts and political climate that we are all seeing unfold on the news daily; they may not be lyrics quoted on Tumblr anytime soon, but they are well thought out and are sure to have fans screaming along. A stand out part for me is in album opener â€œPower and Controlâ€, the lyrics â€œHammer coming down with overwhelming force, we're on a collision courseâ€, are belted out over a bass and drums interlude before a massive two-step break down that would leave both fans of 80â€™s thrash and Trapped Under Ice battling it out for the microphone.

The Falcon: Gather Up The Chaps