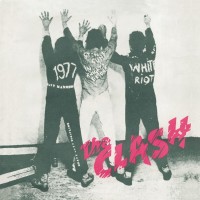 By the time the Clash released their debut single, they had already hired and fired several members, had already established themselves as punk titans, and had already â€œsold outâ€ (singing to CBS for a whopping 100,000 pounds). How amusing was it, that all that had happened in less than a year since the bandâ€™s founding. Now, for a punk band to put out their debut in less than a year seems rather quick. But, in those first two or three years of punkâ€™s existence, eons happened in weeks.

So, it was no small occasion when the band released their first single, and today, still one of their biggest hits, â€œWhite Riot.â€ Following in the stead of the Damned and the Sex Pistols, the â€œWhite Riotâ€ single graced an audience that was already well versed in punk rock. Yet, at a time when you could count the number of English punk bands on two hands, â€œWhite Riotâ€ both played into the perceived notion of what punk was while trying to elevate itself above the unfortunate stereotypes.

This is inherent in the songâ€™s great paradox. On its face, the band is urging white people to riot, written after Strummer and Simonon were involved in the Notting Hill Carnival Riots. According to the Clash, the black community took direct action when demanding social change while, as the group saw it, white people had a sort of disdainful laziness when it came to actually doing something. So, to that end, â€œWhite Riotâ€ was as clichÃ©d as punk can be (even though the clichÃ© may not have yet been forged) â€œLetâ€™s break stuff!â€

But, thereon, lies the songâ€™s clever trap. Written as a call to blow up the ivory tower, the Clash were not only advocating direct action, but were asking why certain communities behaved in separate ways. All though the lyrics bore a call to action for the white middle class, itâ€™s implied that the Clash were even taking a higher level look at society: Why do certain segments react differently? What mechanism put these things in place? How can we tear it all down?

Of course, it certainly didnâ€™t hurt that the song is propelled by one of the greatest punk riffs of all time. A classic early Mick Jones snapper, the guitar lines, much like those famous Ramones tunes (which the Clash loved) was genius in simplicity. In his later Clash years, Jones would sometimes bemoan the song, but at the time, he had forgotten that the music of â€œWhite Riotâ€ is a fundamental building block- a sledge hammer to over processed pop music, a paeon to the great 50â€™s rockers, and a whip to get previously sedate music fans up and jumping.

Complicated music? No. But, so what?

The flip side, â€œ1977â€, found the band spitting at former rock architects. The grand irony being, that despite the famed lyrics â€œNo more Elvis, Beatles, or Rolling Stones!â€, individual members of the band were fans of all those guys. Still, perhaps the point in that is even if you have heroes, you donâ€™t have heroes, and, if this is where the old guard has gotten us, maybe the old guard wasnâ€™t so great. Of course, itâ€™s also sort of just a cheeky bit of dissing for fun. You gotta attack something so why not attack the biggest targets there are?

Perhaps more directly than any punk band before, the Clash were making direct political commentary. The Sex Pistols were striking out angrily, but, it wasnâ€™t (and still isnâ€™t) clear at exactly what. But, when Strummer roared in his shattering, cracking voice, â€œYou think it canâ€™t go on forever/but the papers say itâ€™s betterâ€¦â€ And of course, there the famous line where Strummer calls out the rich just before referencing fire arms.

Again, Mick Jones plays the part of a revved up Chuck Berry, frequently flipping out lines that are more than reminiscent of those famous Berry fills. The fact is, this release found the band at their most energetic and wildest. Yet, because both songs seemed to be blunt tirades, which only revealed their depth upon close inspection, it was clear that band had a great deal of potential to both play with punkâ€™s formula and move away from the sonic barriers altogetherâ€¦ not a bad start for an ex-pub rocker and two kids who were still learning to play their instruments.

The Clash: The Clash (UK)