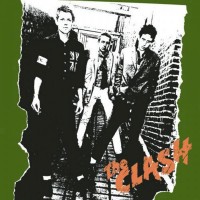 The UK version of The Clash, their self-titled album, in comparison to the Never Mind The Bollocks genuinely suggested a (gasp) future, whether musically or in the lyrics. Where the Sex Pistols were a little languid, the tempo not more studio Who than Live At Leeds, the hyper drums and thrusting, snarling guitars of "Janie Jones" were running on fumes, exhilarated at what the havoc they caused and power they wielded. The Clash were "the only band that matters" for a brief span because they suggested a way forward, a bleak sort of hope epitomized in "White Riot": "Are you taking order/or are you taking orders? Are you going backwards/or are you going forwards?" There's a real venom to the anti-shit job "Career Opportunities" but, as with so many punk songs, also the utter thrill of being able to make the kind of complaints just about to burst from them, the sheer glory of ordered chaos.


What makes The Clash so insanely important for punk is how much ambition it had and yet these can also just be two minute three chord punk songs. Joe Strummer and Mick Jones weren't the first punks with a pop sensibility, but they both came from pub rock and glam respectively. Like Steve Jones' work on Bullocks, Mick multi-tracked all of the guitar work, taking this kind of heavy rhythm from Mick Ronson and Mark Bolan - the guitars on "I'm So Bored With The USA" are aggressive and not as sensual as Ronson's leads, but they have that sheen and high polish. Most of the songs on here don't have the playfulness and aspirations of London Calling's tracks, but that intensity, sense of melody, and sincerity is all over The Clash. They showed how punk bands could imitate The Ramones through their brevity and wit but also focus that into hyper political statements about real, breathing life - no Oi bands would exist without "Remote Control".

The Clash shows too though where the band would go, and by proxy where punk could mutate and shape itself. The cover of "Police and Thieves" was an adoption of a reggae song into a punk format, the biting rhythm guitar and bass taking the original lament and retaining the sense of distant cool while sharpening the original smoothness of Murvin's recording. So much post-punk can be traced from this hybridization; And Strummer's sense of The Beatles, rockabilly, and pub rock melody throughout, with the harmonies and unexpected melodic turns, paves the way for so many London and English bands, maybe unaware of their (excellent) bastardization of 60s pop.

The Clash, for better or worse, created so many bands that to trace all of their influence would be exhausting. Without hyperbole (fuck it, maybe a little) their debut is still one of the greatest rock albums, easily in the higher pantheon of punk albums, and maybe the best debut album...ever. Every time you play it you're back in the garage with some guys, who've been in a few bands, can play hard enough by now, who know this might be their last chance, and play the songs like their lives depended on it, as they always did.