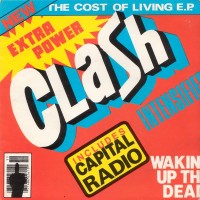 The four songs that make up 1979's The Cost of Living E.P. have, in the last 37 years, been so thoroughly repackaged, repurposed and reissued that even a fairly faithful modern-day Clash fan could remain forgivably ignorant of their original appearance.

Sitting in between the band's sophomore LP Give Em' Enough Rope and the landmark London Calling, Cost scratched a couple itches. First it was timed for release on the General Election day, May 11th, during which Margaret Thatcher's administration came into power in the UK. From that standpoint it fit nicely into the trend of first wave UK punk bands lining up public salvos to coincide with major British cultural events. Rather than the detergent box cover art the E.P. ran with, there were plans for a cover featuring Thatcher's face against a swastika. The story goes that Mick Jones nixed this not due to the incendiary Nazi imagery, but rather because "I don't want no politicians on the front of my records."

Secondly the record served as a means of making "Capital Radio" more widely available. The song's original incarnation appeared on a 1977 mail-order flexidisk that had become quite expensive and collectable in by `79 (to say nothing of what it's worth today). The new recording of the song was a means to get the track back into circulation. To have a song attacking commercial music policies exist exclusively as an unattainable collectors item seemed a tad antithetical.

The Cost of Living's centerpiece is the band's definitive cover of Sonny Curtis' "I Fought The Law." To a generation the anthem has become so synonymous with the Clash that the Crickets' original has become a curiosity, the track's origins forevermore serving as fodder for trivia contests. A pair of Give Emâ€™ Enough Rope studio outtakes appear next, the A-side closing off with "Groovy Times" and the flip leading with "Gates of the West."

Keeping in mind that this was prior to the band blowing out their genre boundaries, "Gates" is the more immediately Clash-like of the two. The Jones-sung tune builds to a chorus that would be memorable on it's own, only it's bolstered with a huge hook delivered in the pre-chorus ("Eastside Jimmy and Southside Sue..."). If there was a truly under-appreciated pop gem of the Clash's B-side material this is a strong candidate. "Groovy Times," carried by acoustic guitar and harmonica, is less muscular but carries more lyrical weight. Joe Strummer's tale of urban blight and lost civic innocence features a few striking lines that stand in contrast with the more shallow sloganeering of songs like "I Fought the Law." "They discovered one black Saturday / That mobs don't march they run / So you can excuse the nervous triggerman / Just this once for jumping the gun."

"Capital Radio" (which in collections appears as "Capital Radio Two") is more than a re-recording. The song's intro is a fake-out, playing with fans potential familiarity with the original. More importantly it cumulates in an extended section in which Strummer barks out sardonic money making schemes. Time has clouded a few of the allusions at play here, as at once point Joe shouts "have you seen me dance? I'm the one that I want!" referencing the culture-dominating soundtrack to the musical "Grease" which arrived a month prior.

The E.P. fades out "Capital Radio" and immediately jumps back to the chorus of "I Fought the Law," as part of a mock advertisement for the very E.P. you're already listening to ("And Iâ€™m standing here to day to tell you all, give you the hard sell because The Clash Cost of Living EP is now at your nearest Clash showroom!"). The bizarre little outro is a prefect thematic tie with the music-as-product cover art and the commercialization chatter added to "Capital Radio." It's also exactly the sort delightfully quirky contextual detail that makes no sense when you cut the record into pieces. Of all the Clash's non-LP material it's likely one of the least re-purposed sonic elements, and all the more reason The Cost of Living E.P. deserves to stand on its own, not regurgitated as part of an endless stream of collections and compilations.

The Clash: The Clash (USA)