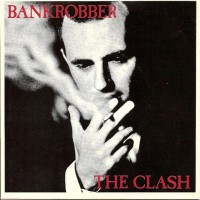 â€œBankrobberâ€ stands as the critical point in the Clash discography. Riding off the success of London Calling, the band both returned to their roots as well as charted into unknown waters. The split between London Calling and Sandinista! remains as the line for many a-Clash fans. Is that where the band really capitalized on the promise of punk rock- taking new ideas for extreme experiments- or is it where they lost their way in aimless rock decadence?

â€œBankrobberâ€ suggests the former. For the track, the band drafted Jamaican producer/singer/deejay Mikey Dread. Through their career, the Clash made it a point to pay tribute to their Jamrock influences, covering Toots, Junior Murvin, Willie Williams, and even drafting the Mighty Upsetter himself to produce an (ill-fated) session.

But, by selecting Mikey Dread as their comrade-in-arms, the Clash injected a different talent into the bloodstream. By the time the Clash covered Toots, Williams, and Murvin, and worked with Perry, all of those artists were already firmly established as preeminent reggae artists. By contrast, Mikey Dread was a hot up-and-comer who had released one well received Jamaican album, but had yet to release his seminal World War III LP.

Yet, itâ€™s no coincidence that Dread was selected by the band. Dread made a name for himself by inserting weird soundclips into his radio show between songs, so itâ€™s likely that the Clash, who were already breaking the â€œtraditionâ€ of punk wanted someone who was breaking the tradition of reggae, all while reserving a profound respect for the form.

The result, without exaggeration, was a masterpiece. â€œBankrobberâ€ is quite clearly a merging of two cultures. The Clash brought their powerful, melodic rock beat to the track while Dread, working the controls, brought the lumbering, soulful power of reggae. Yet, the result is greater than the sum of the parts. In working together, the pair created a sort of weird space age sound that as built of the elements of dub, but was both too energetic and too hi-tech sounding to really qualify as holding true to the Jamaican form.

In that combination, both artists created a new, ghostly sound that was trippy and aggressive. Of course, Joe Strummerâ€™s lyrics, which were obtuse as always, helped add to the tuneâ€™s alternating menacing and apologetic tone. In the song, Strummer details that his â€œDaddy was a bankrobber, but he never hurt nobody/ he just loved to live that way and he loved to steal your money.â€

Perhaps borrowing form the Jamaican legend of Rhygin (as characterized in The Harder they Come- see also â€œGuns of Brixtonâ€), Strummer created a portrait of a character that fights economic injustice on a hyper-personal scale, getting his thrills, not from the violence of robbery, but rather, from scamming the people that put the system into place.

As the track progresses, Strummer ruminates on the perils of capitalism and even outright suggests, through an â€œold man at the barâ€ that everyone except the tippy top are cogs for the tippy top and the only way out of the trap is break the rules of the trap.

Strummer masterfully never really lets on if he agrees with the Old Man hypothesis, but by the way he accentuates â€œhe loved to steal your money, Joeâ€™s stance is pretty clear.

Yet, while the a-side was a sharp indignation of first world economics, the b-side was perhaps even more clever in its meta-commentary. Starting in the late 60s, Jamaican producers would take an a-side track and distort the track for side B, perhaps removing the vocals or adding other instruments, and this, created the concept of a â€œVersionâ€ (which the Clash would more thoroughly explore on Side 6 of Sandinista!). This practice eventually led to the creation dub and then, the creation of DeeJay tracks, wherein Jamaican toasters and DeeJays would chant, talk, sermonize, or rap over an instrumental version of the A-side.

Directly paying tribute to this style, the Clash stripped their vocals off â€œBankrobberâ€ and Mikey Dread recorded his own DeeJay cut of the riddim as â€œRockers Galoreâ€¦ on a UK Tour.â€ The pairing between the artists was obviously a joyous one as Dread spends the track commenting on the fun he was having touring with the Clash, and more importantly, on the connection between the punk and reggae scene. Punk has a long history of saluting their rasta counterparts, but perhaps the crush was a one-way affair. Aside from the Perry produced (and likely written) â€œPunky Reggae Party,*â€ when has reggae tipped its Tam to punk rock?

So, itâ€™s important that Dread, who was well respected by Jamaicans and Londoners alike, salutes the harder style. Of course, it helps that Dread brings his A game. As he chants and raps, Dread moves at a high speed, and really, if you compare his style to other DeeJays in 1980, Dread seems to be the hardest and fastest toaster out of all of them- maybe Yellowman ties the competition, but itâ€™s close.**

The fact is, â€œBankrobber/Rockers Galore is two sets of young minds at the height of the creativity or close to it, operating a in a fast, rambunctious space. Itâ€™s unlikely that the concept of â€œBankrobberâ€ was planned before it was recorded and only in unknown spaces like these, does greatness this intense flourish. Both the Clash and Dread seemed to be saying that punk and reggae had the same primal energy. Further, they seemed to be saying that punk and reggae had no real â€œrulesâ€- only a fiery spirit that was able to manifest in many a different form. Unfortunately, this is something that both of those genres still struggle with today.

*Despite the credits for the tune, does anyone really believe that Marley penned the lines about hanging out with the Damned and the Clash or the bit about â€œBoring old fartsâ€? Thatâ€™s not a very Marley like statement. But as for Perry? Firmly in his wheelhouse- and I mean this to compliment the Upsetter and take Marley down a notch. Certainly not vice versa.


**According to some sources, there were aborted plans for the Clash to release a "Bankrobber" 12-inch that included a massive Disco mix of the song along with either "Rockers Galore" or "Robber Dub." That surfaced in some form on Black Market Clash. Still, a massive, "Bankrobber" dedicated 12-inch is probably the greatest Clash "never was."