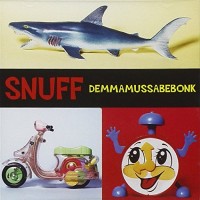 By the time 1996 saw punk rock explode into the mainstream, {{Fat Wreck Chords}} had already amassed a set of quality acts, and was primed to take advantage of this new found interest in the genre. On February 13th of that year, Snuff released their now classic Demmamussabebonk.

Snuff had been around for a while, first as a three piece which disbanded in 1991 and, after reforming in 1994, added the unique sounds of a trombone and Hammond organ to their repertoire. While well-known in the UK and parts of Europe, they had yet to break into the USA and other markets. The band's received a boost in notoriety whenÂ the second Fat label compilation Survival of the Fattest, was released almost a month after Demma, andÂ featured two Snuff song: â€œNick Northernâ€ from the LP, as well as the unreleased track â€œWalk.â€Â

On Demma, the tippity-tapping on the hi-hat followed by powerful, raw guitar chords topped off with a face-smashing drum roll into that rapid beat on the lead track â€œVikings,â€ listeners were immediately lured in to what was to come and unable to turn away. Demma is an album of rapid-fire songs full of energy which, despite the additional instruments, still carried on Snuffâ€™s general tradition of writing amazingly catchy and unique (at the time) songs. â€œMartinâ€ and â€œSunny Placesâ€ are riling tracks along with loud and bombastic tunes like â€œBatten Down the Hatchesâ€ and â€œPunchline,â€ all mixed in with the straight-forward punk of â€œDicky Troisâ€ or â€œB.â€

Surprisingly, especially for those who were lured in by the two Snuff tracks on Survival, the organ and trombone donâ€™t make an appearance until the new indisputable classic â€œNick Northern,â€ the fifth song in, but further tracks made more use of either or both instruments. The album is topped off by the excellent â€œWho,â€ which, as with â€œNick Northernâ€ keeps a hold of the energetic punk roots while also sticking the landing with a nice, head bopping rhythm and makes excellent use of the Hammond organ.

While not as sonically polished as their two follow up albums on Fat, Demma is arguably one of the best of the Snuff albums. Its raw sound in many parts gives it a down and dirty feel that many of its contemporaries, by that point signed by major labels and releasing slickly produced records, were missing. Surprisingly, though, for a band known for their sense of humor, looking back on their discography as a whole, this is also likely one of their more serious and straight-forward albums.

Demmaâ€™s influence has been felt in the years afterward, as well. Prior to the album few bands who werenâ€™t ska or (at the very least) ska-influenced, could get away with incorporating brass or an organ into their music. Now brasscore is a sub-genre of punk with a small but loyal following. At a time when it was nigh unheard of, Snuff dove headlong into it and made a sound that has been often imitated, but never duplicated, in the years since.