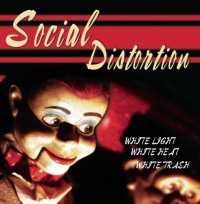 I was already a pretty big Social Distortion fan in 1996 when they released their fifth album White Light, White Heat, White Trash. (The unwieldy title was a play on The Velvet Undergroundâ€™s White Light/White Heat.) It had been four long years since their last LP, and that seemed like an eternity back in those days. (Little did we know there would be an eight year wait for the next one, and seven years for the one after that.) I was so anxious to hear it that I bought it on the day it came out. After a couple of spins, I was a bit underwhelmed. It took me a few more listens to figure out what was going on. The record had a far greater lyrical depth than its predecessors and it took a little longer to process. It sacrificed instant gratification for a much richer listening experience. For the first time, Mike Ness had truly bared his soul for all the world to see.

Social Distortion was a well established act by 1996, having been around in one form or another since the late 70â€™s. They had already made a great punk album (Mommyâ€™s Little Monster, 1983), a great cowpunk album (Prison Bound, 1988), and two great rockabilly flavored albums (Social Distortion, 1990 and Somewhere Between Heaven and Hell, 1992). They had managed a handful of minor hits (â€œBall and Chainâ€, â€œStory of My Lifeâ€, â€œBad Luckâ€), but had never broken through to mainstream success. They were even on a major label, although this would be their third and final record for Epic. (Back in the roaring 90â€™s, you had to sell a lot of records for a major to keep you around.) Mike Ness was 34 years old, and no longer an angry young man. He was finally ready to get introspective.

White Light, White Heat, White Trash was an intensely personal album. It was obviously personal to Ness, but also to those of us who felt a deep connection to it. Anyone who grew up in a household with a dogmatic religious system should be able to relate to this album. Itâ€™s about completely losing you faith, but then rediscovering it on your own terms. Itâ€™s about damnation and redemption, and making peace with your past. The first and last songs on the album didnâ€™t really seem to belong with the rest. Opener â€œDear Loverâ€ was a melancholy song about the painful loss of a romance gone bad. It started out slow, but then really kicked into gear. You could hear the raw emotion in Nessâ€™s mournful wail. Closer â€œUnder My Thumbâ€ was a hidden track. It was a punked up version of the Rolling Stonesâ€™ classic. Social Distortion had also recorded it early in their career. (That version is on the Mainliner compilation.)

The ten tracks in the middle formed a dark song cycle. Iâ€™m not sure if it was intentional, but from song to song it almost felt like a single narrative. While the tempos were varied, the mood and intensity were consistent. â€œDonâ€™t Drag Me Downâ€ (a personal favorite) spoke of rising above a poor (racist) upbringing. â€œUntitledâ€ was a thank you to an unnamed someone for sticking with them through the trials and tribulations. â€œI Was Wrongâ€ was the first single and was a minor radio hit. In it, Ness acknowledged his many poor decisions, but came just short of apologizing. There was the sense of realization that those choices led him where he is today. â€œThrough These Eyesâ€ told of the many things Ness had seen in his life, including the guiding hand of a higher power. â€œDown on the Worldâ€ was exactly what youâ€™d expect and was probably the angriest song on the record.

Musically, this record was much more straight ahead punk than the last couple. Heavy subject matter seemed to translate well to aggressive music. Mike Ness might also be underrated as a guitar player. The song and chord structures were fairly traditional, but his solos were bluesy perfection. There was no shredding, but every note felt right. Sometimes it seemed like it was easier for him to express his emotions through his fingers than it was his voice. â€œWhen the Angels Singâ€ was the second single from White Light, White Heat, White Trash, and the one song I wanted to hate. It was sappy and sentimental, but Ness was so earnest that he made it work. â€œGotta Know the Rulesâ€ spoke of learning a lesson the hard way. â€œCrown of Thornsâ€ used some of the albumâ€™s most overt religious symbolism. â€œPleasure Seekerâ€ looked beyond hedonism for a greater satisfaction. â€œDown Here (With the Rest of Us)â€ was a slower, working manâ€™s blues song (and another personal favorite). Twelve songs in all, not a dud in the bunch.

White Light, White Heat, White Trash was the last Social Distortion album to feature Dennis Danell, who died of a brain aneurysm in 2000 at age 38. Ness and Danell had been the only constant members throughout the bandâ€™s long history. Chuck Biscuits (DOA, Black Flag, Circle Jerks, Danzig) was listed as the drummer, but the recording was allegedly done by an uncredited studio musician. (I saw the band twice with Biscuits, and he definitely gave their live sound an extra punch.) After a couple year stint with Social D, Biscuits appears to have fallen off the face of the earth. On White Light, White Heat, White Trash, Mike Ness and company captured lightning in a bottle. It had a real impact on me 20 years ago, and it still has an impact on me as Iâ€™ve recently revisited it. I would argue that all of the Social Distortion (studio) albums are worth owning, but this was the band at their very best.Â

At The Drive-In: Acrobatic Tenement