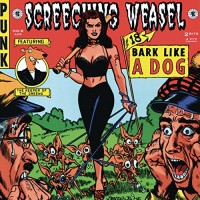 Travel with me if you will to a time before Ben Weasel's antics became fodder for social media mavens. A time when conversation about Mr. Weasel actually revolved around his musical endeavors. Specifically, our starting destination is 1994, the year Screeching Weasel released its supposed final album, How to Make Enemies and Irritate People. The record, which featured Green Day's Mike Dirnt filling in for the already departed Danny Vapid, marked the final Screeching Weasel recording before Vapid, along with Weasel and drummer Danny Panic, would resurface as the Riverdales. Somewhat surprisingly, only a year after the Riverdales' 1995 self-titled debut, Screeching Weasel's classic lineup, including the aforementioned Vapid, Weasel and Panic, along with guitarist John Jughead, returned to the scene, joining Fat Wreck Chords and bringing some of the flavor of the Riverdales with them.

The band's return record, Bark Like A Dog was slicker and more polished than anything they had previously released, both in terms of production and songwriting. Production-wise, the album hewed much closer to the signature Fat sound, with Mass Giorgini adding a layer of polish that helped the band fit firmly in the company of its new labelmates. In terms of the songwriting, the tighter, more compact approach favored by the Riverdales clearly seeped in, as these songs show more of the blatant Ramones influence of that band, as opposed to the more subtle Ramones leanings illustrated by past Weasel recordings. Compared to much of the band's prior output, it seems more time and effort was spent crafting these tracks, and it shows. At the same time, some of the raw emotion of earlier effort is lacking, though the reasons for that are not entirely clear.

While perhaps not the best collection of Screeching Weasel songs overall, there are some standouts to be sure, including "Cool Kids," which in hindsight has become one the band's signature songs, likely due to its inclusion Physical Fatness, the third in the ever-popular Fat Wreck Chords compilation series. That sort of exposure led Bark Like A Dog to land on the Billboard Heatseekers chart, the only Screeching Weasel album to accomplish that feat.

At the ripe old age of 20, hindsight would say that Bark Like A Dog is not Screeching Weasel's best record. However, as an example of the sort of polished pop-punk that was sweeping the nation in 1996, it's a strong one. It also holds a special place in the hearts of many who spent their formative years in punk during this time. Too young to really appreciate earlier works like My Brain HurtsÂ and Wiggle, Bark Like A Dog, for many, is the quintessential Screeching Weasel record. While others may hold previous works in higher regard, Bark Like A Dog still holds up pretty well, and that's no small accomplishment for an album entering its third decade of existence.

Anti-Flag: Die For The Government