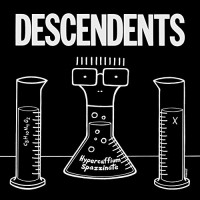 Punk music doesnâ€™t have many bands like The Descendents, while some of the more prominent punk bands from the 1980s will pull themselves together for a reunion tour every few years, milk the festival circuit for some quick cash, or feature so few (if any) original members theyâ€™ve become a tribute band of sorts. The Descendents, thankfully, were never that band. Sure they take a decade or more between albums, but when they do put a new album out they rarely disappoint their fans. Enter, Hypercaffium Spazzinate, an album that sounds more relevant than most things the bands they inspired released in the past five years let alone the few peers they still have left making music.

One of the reasons the band has been able to age so well, is theyâ€™ve never tried to grow their sound. Yes, the songwriting and musicianship has grown tighter over the past 30 years the band has been together. But, they never made the sprawling concept album or tried to revitalize their sound to capture a new generation of listeners. Nowhere is that more obvious than on album opener â€œFeel This.â€ A song that sounds as at home in 2016 as it would have in 1986, the most stunning part of which is that Milo Auckermanâ€™s voice still has the same power it did before he went to college. While there is certainly a bit of age on his voice and his delivery is far more confidant the power is still there. But, for the uninitiated, it would be very easy to convince someone that this song came off the same album as â€œHopeâ€ did all those years ago,

Another facet of the band which has only grown stronger over time, are the guitar hooks. Youâ€™re unlikely to find Stephen Egerton listed on any â€œTop Guitaristâ€ list but heâ€™s certainly one of the most underrated of his era. One only need listen to the first ten seconds of â€œOn Paperâ€ to be sucked into for the rest of the song, everything about the opening riff from the notes being played and the tone used is some of the sweetest punk rock guitar candy any of us have heard in a long time. Add to that the humorous self-deprecation found in so many classic Descendents songs, and longtime fans will be happily reminded why they got into the band in the first place while newcomers will be glad they picked up the album.

â€œNo Fat Burgerâ€ finds the band returning to a central theme throughout their career, food. While bringing to mind both the Fat EP and its sixteen second ode to eating â€œI Like Food,â€ the song itself is about how the band can no longer enjoy the greasy food they once did. With lyrical references to heart problems, it may also be the greatest song to touch on genetic cardiac issues ever penned. The real genius about this song though, is it sums up why this band is able to last. While the band hasnâ€™t avoided socio-political commentary completely, itâ€™s never been the focal point of their career. While this made them the exception in throughout the eighties, it may also be what allowed them to survive the eighties. The topics that have dominated their songs throughout their career, in addition to food, are girls, self-deprecation, and from time to time bodily functions. There are all topics that a band can write about at any age and it have an heir of relevance and not sound forced.

While theyâ€™ve fought against growing up at every turn throughout their career, there are some signs the band has matured slightly. The song â€œSmileâ€ is a love song, but in the purest sense of the word. While many loves songs dote on the significant other, this song digs deeper than that. When Milo sings â€œWhat I wouldnâ€™t give to see you smile once in a while,â€ heâ€™s singing about a very specific kind of love, love that can exist inside and outside of the plutonic realm. It is certainly a refreshing break from many of the bands they inspired, who are all now in the forties, approaching love the same way they did twenty years ago at times down to the actual songs still being about high school and meeting after class.

This album is surprisingly filler free, while Everything Sucks and Cool to be You had a few throw away songs, nearly every song on here holds your interest after the last one and sets you up for whatâ€™s coming. Even the back end of the album has great material on it, with â€œSpineless and Scarlett Redâ€ being one of the strongest songs in the bands catalog since they first got back together in the mid-nineties. Itâ€™s one of those songs where everything comes together for the band from the guitars, to the bass and drums, and the vocals. While the song is a less than joyous meditation on a relationship poised to end soon, the song is just so damn upbeat you canâ€™t help but singalong the second time through the chorus.

Reviewing albums by bands that are remembered as much for their legacy as their current material is always a nerve wrecking pursuit; The Descendents are one of those bands who are legends in their own time, which means youâ€™re almost always at risk of being far too kind or being accused of being way too hard on a band that should get some respect based simply on what they did before. Fortunately, the later scenario is not going to be an issue, as this may well be the strongest album the band has released since All. After thirty years playing together, this may be the tightest band in punk rock right now. Youâ€™d be hard pressed to find a better rhythm section in the pop-punk realm than Karl Alvarez and Bill Stevenson and Stephen Eggerton and Milo Auckermanâ€™s contributions have already been noted. Record that in a place like The Blasting Room, and youâ€™ve got one of the strongest albums this band has released in thirty years.Â