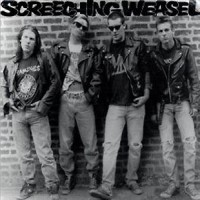 In the early 90â€™s, someone got the bright idea to release cover versions of complete Ramones albums. The now defunct Selfless Records put out the first three between 1992 and 1994. They featured Screeching Weasel, The Vindictives and The Queers, three of the biggest names in pop-punk at the time. Ben Weasel claims that they were drunk a party when they agreed to do it. He also asserts that the band was on the brink of falling apart at the time, and that making this album helped pull them back together. Itâ€™s also worth noting that Ramones is the first SW album to feature the classic lineup of Weasel/Jughead/Danny Vapid/Dan Panic, although Weasel did not play second guitar as the Ramones only had one.

The record was recorded very quickly and very cheaply in one 14 hour marathon session by Mass Giorgini, later of Sonic Iguana fame. Ben has said that both he and Danny Vapid prefer Leave Home, but thought they could do a better job on this album. They also wanted to start at the beginning. Screeching Weasel chose not to mess around too much with the Ramonesâ€™ arrangements. The songs were slightly sped up, but otherwise largely musically true to the original versions. Any differences were subtle, like an extra noodling guitar part on â€œI Wanna Be Your Boyfriendâ€ or an extra vocal melody on â€œ53rd and 3rdâ€. The main difference was in the lead vocals. Ben Weaselâ€™s nasally rasp stood in stark contrast to Joeyâ€™s unorthodox but somehow melodic delivery.

Giorgini mixed the LP the same way that the first Ramones was. The guitars and vocals were on one side, and the bass and drums were on the other. The band even attempted to pose for a black and white cover photo similar to the 1976 classic. The record ended up working really well, even if it was a bit of a novelty. Although covering a complete has become a fairly common practice, it was virtually unheard of at the time, at least in punk circles. It was a little refreshing. After years of hardcore encouraging bands to kill their idols, it was nice to see the next generation give credit where credit was due.

Screeching Weaselâ€™s Ramones has aged far better than most of the records in this series, which ended up going on way too long (on various other labels). Itâ€™s essential listening for SW fans, but probably not old school Ramones fans. While it canâ€™t touch the original, it does it justice and remains very listenable. It has been reissued by a couple of different labels over the years, and is currently available as Beat is on the Brat (with bonus tracks) on Panic Button. It obviously didnâ€™t hurt that they started with arguably the strongest punk material of all time. It may seem strange to praise a band for taking a 10/10 album and turning it into an 8/10 album, but itâ€™s simply impossible to match the magic that the Ramones somehow managed to capture 40 years ago.Â

The Queers: Rocket to Russia