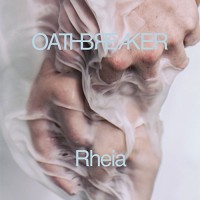 Oathbreaker has been one of the more original sounding hardcore bands of the past decade. From their album art, to the frightening vocals, and dark, poetic lyrics, theyâ€™re that cool European band you constantly wonder when they will blow up to critical acclaim. The Belgian foursome consistently expand their sound, most notably diving deeper into metallic territories, swimming further away from post-hardcore; and on their latest release, Rheia, Oathbreaker have entered a blackened zone of torment that will finally give them the respect they deserve.

From the beginning, cries wail out, the background slowly accumulates, and â€œSecond Son of R.â€ is released, flooding eardrums with screams, the track melodically crystallizes, then shatters with blood curdling shrieks. â€œBeing Able to Feel Nothingâ€ drags in doom bellowing, trudging through mucky resistance, taking time to breathe, while remaining haunting. Halfway through the 7 minute track, instrumental focus sharpens, and the yelling echoes until all is left behind, transitioning into the simple, moving acoustic area of â€œStay Here / Accrocheâ€‹-â€‹Moi.â€

This is not the Oathbreaker we are used to. Sure, the excellent, harsh screaming is there, but it has been broken up with far more experimental sounds. Caro Tangheâ€™s voice has become increasingly versatile, singing becoming an instrument in its own right. Clean vocals are present, adding a new layer of nuance and means to convey exhausted and sentimental emotion. A tremendous increase in wistful, stirring moaning makes the vocals become one with the song, not just standing out for the sake of contrast or difference, exemplified on the barren, bass drum heavy â€œImmortals.â€

Rheiaâ€™s peak comes in the form of â€œNeedles in Your Skin,â€ 2016â€™s crown jewel. Perfectly executed switches of tempo, sonic and driving one moment, steady and even keel the next; onward concluding to metallic precision. The guitar soloing is remarkable, rapid and relentless, a rushing escape to Tangheâ€™s lamenting, â€œHow could you go without me?,â€ a cat and mouse game amplified to extraordinary proportions. All is artistically concluded like a jet engine powering down after an expertly handled flight.

â€œIâ€™m Sorry, This Is,â€ â€œWhere I Live,â€ â€œWhere I Leaveâ€ is the second halfâ€™s exploratory trilogy, shifting into a meditative background noise of sounds and chatter. Delicate, distorted guitar strums for sprinkles of shoegaze. An eerie ambient factor comes into play, as well. While vocally reminiscent of past Oathbreaker offerings, this set of songs is also where the Deafheaven effect is most noticeable. Jack Shirleyâ€™s fingerprints--of Comadre and Sunbather production fame (among many other notable pieces)--are clearly all over this. While it can come off as droning, the sound is effective for the albumâ€™s notion of decay. A gentle comedown and acceptance of disappearing that leads to â€œBegeerteâ€™sâ€ warped, solemn exodus of longing. Itâ€™s the sound of absolution that makes this album feel particularly complete.

Rheia is Oathbreakerâ€™s masterpiece, blackening extreme and post-rock genres alike. With the ability to scare, sedate, and haunt, the album brings a full emotional response ensuring goosebumps at any point in its well accomplished hour of length. A work to be cherished and widely appreciated, putting Oathbreaker prominently on the map.

Crying: Beyond The Fleeting Gales