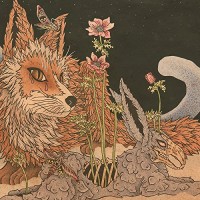 It's been 10 years too long but it was absolutely worth the wait. Mercy was a note I grew content with, accepting that if Planes Mistaken For Stars were finished, then at least they went out with a bang. Major props to Deathwish for helping getting these wheels turning once again because Prey finds them at their very best, devouring everything with the same kind of heaviness and rugged intensity that first draped Fuck With Fire. It's yet another ferocious and unrelenting piece of noise that can only be described as beautiful chaos.

PMFS don't beat around the bush as they jump off as ruthless as ever right off the bat. "Dementia Americana" reminds you why they're one of the few who could mix genres such as metal, hardcore, punk and post-hardcore all together, to such great effect. Gared O'Donnell's vocals have gotten a bit weathered but it's a wear-and-tear that's not too much and which continues to fit their musical style. I love how he knows when to gear it up to louder, more abrasive decibels and when to tone it down -- all set to very dark, cynical lyrics we can all relate to. He's never been one to downplay his emotional turmoil with the world and his interplay here with the musicians is so on point with the lyrics matching the instrumental highs and lows so well. He doesn't overpower too much of the album and it works in their favor. The hypnotizing chords on "Til' It Clicks" follows up before an explosive finale that reminds you how grueling they can be to the unassuming and unsuspecting. This song I can't wait to hear at Fest for sure.Â

O'Donnell even throws on a little something for Hawks and Doves fans in his raspy rendition of "Black Rabbit" -- a heartbreaking acoustic that brings out tons of despair.Â "Fucking Tenderness" is one of the less aggressive gems but a guitar-intricate one with an amazing solo that continues to show that PMFS are more than just a powerful lead. Chuck French is as stellar as ever on the guitar with "Pan In Flames" and "Alabaster Cello" really showing the dynamism of the band's guitar-work. These tracks have it all -- crushing riffs and sick solos that beckon you to the gates of hell. They also help end the record just as strongly as it started. Mike Ricketts kills it on the drums as well -- as incessant and pounding as ever. He never lets up and deserves so much credit for helping build the engine yet again. One that drives home another heavy, frantic experience that's a must-have for fans who don't like quiet music. They've always been a band I felt never got the plaudits they should have but with Prey, it doesn't matter, because 10 years later and I know now that their music will always speak for itself. This is another fine example why. Brutal yet comforting.Â