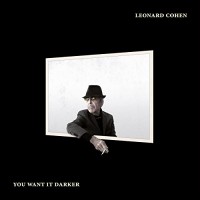 Â  Â  Â  Â  Â  Â  Â  Â  Writing this review, after Leonard Cohenâ€™s death, makes it that much harder not to attach some of the lyrics to the fact he saw what was coming. Granted, for an eighty-two year old man to write about his impending death, shouldnâ€™t be seen as unusual. But, with the first full week of November behind us the title You Want It Darker comes off less like a joke about the albumâ€™s content and more of a summation of 2016 as a whole.

This album, musically, feels like a return to Cohenâ€™s work in the 1960â€™s and 1970â€™s. While all the songs are brilliant, theyâ€™re not pop songs. You will not find a â€œHallelujahâ€ anywhere on this album musically or thematically. This is a return to the stripped down sounds of his early work, and the lyrics lack the upbeat nature that had occasionally found their way into his work starting with Ten New Songs and growing even more prominent on its follow up Dear, Heather. One of the bleaker moments, for me, is on the title track where Cohen sings, â€œIâ€™m ready my Lord.â€

Elsewhere, the album finds Cohen touching on subjects like God, religion, and sin. On the song â€œTreatyâ€ Cohen sings, â€œI heard the snake was baffled by his sin. He shed his scales to find the snake within. But born again is born without a skin, the poison enters into everything.â€ The lyrics paint a fairly obvious picture of self-awareness and reflection, but for whom? Is Cohen speaking of people in general or has he found that studying Buddhism later in his life didnâ€™t help him in the way he had hoped it would?

For any longtime Cohen fans, love of the romantic variety has always found its way onto the album. While the concept is present on this release, the yearning isnâ€™t there. â€œIâ€™m leaving the Tableâ€ another track that is seemingly about Cohen coming to terms with his own morality and impending death, features the lyric â€œI donâ€™t need a lover, no, no, no. The wretched beast is tame. I donâ€™t need a lover, so blow out the flame.â€ The song itself finds Cohen announcing his departure, which made me think even if he survived a few more years this would be his swan song.

Ever since Cohen re-entered the musical fold with a series of tours brought on out of financial necessity in 2008, his material has been as vital as ever. Starting with Old Ideas in 2012 Cohen would begin a trilogy of releases that were indispensable to fans of music about isolation, the bleakness of the world and loss all filtered through his dark sense of humor. What would have been a capstone on that trilogy also became an artistic capstone as well.

People often find lyrics indicating songwriters knew their death was coming; from Marc Bolan and John Lennon to Kurt Cobain and Richey Edwards. However, in most instances that occurs when fans pick through albums after the artistsâ€™ death and create a mythology around it. In 2016, we lost a lot of amazing musicians. Two of them, David Bowie being the other, were able to capture their deaths on record and in doing so created indispensable masterpieces to close out their careers. Here's to 2017 going easier on music fans everywhere.Â