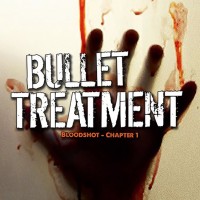 Bloodshot Chapter 1 is the first release in a two part series. It opens with a song called "Damaged". The main riff in this song is pretty gnarly and the whole song rips. Definitely sounds like classic Bullet Treatment. The next song "Let it Bleed" is similar to Damaged in that it opens with a guitar riff and everything else kicks in. Fast, aggressive, and to the point; so far so good!

"Our Lady of Perpetual Exemption" is a mid tempo track that has that standard hardcore feel to it. No twists or turns on this track (and not in a bad way or anything). It basically gives you a breather for a couple minutes before the next one kicks in at full force. It's still a cool track though!

Volatile Animal is next in line and this song sure delivers! Even though it's only 34 seconds long, it's a rocking tune that any fan of short/fast hardcore will appreciate. It has cool dynamic changes throughout and is real catchy. This would be a fun one to see live.

"Mr. Mouth Breather" is a mid tempo track with a little more focus on singing than just yelling. At times this song reminds me of SmartBomb in the way that he is singing with more melody. Slightly different from the other songs on this release; a little less hardcore and more punk rocky I suppose.

"Nowhere to Go" and "All Day to Get There" has a similar vibe as the previous track. It has more singing than yelling. About half way through this song the beat picks up a little. It's the longest song on this release clocking in at just over 3 minutes. Ending with an instrumental breakdown, this song concludes the release.

Overall it's a solid release. A fun listen that encompasses all different facets of punk. I am looking forward to the second part of this!