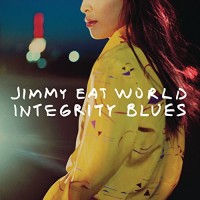 The first thing youâ€™ll notice listening to Integrity Blues is that it doesnâ€™t have any big, hard rock songs. Everything is on the softer side, which leaves something to be desired from a band thatâ€™s so good at creating powerful, energetic music. The first half of the album is almost completely unforgettable, with the exception of mildly catchy lead single, â€œSure and Certain,â€ with its lukewarm lyrics held up against some decent pop hooks. The albumâ€™s opener, â€œYou with Me,â€ clocking in at 5:18, is about twice as long as it needs to be.

The album finally starts to get good at track seven and, to the albumâ€™s credit, the songs that are good are very good. â€œYou Are Freeâ€ is the standout track of the album, pulling off one of the most beautiful, inspirational tracks the band has produced in a long time. Seriously, I might rank it amongst the bandâ€™s top five best songs. â€œYou are Freeâ€ kicks off the trilogy of three of the best songs on the album with â€œThe End is Beautifulâ€ and â€œThrough.â€ Then the title track comes in like a very awkward church hymn that leaves Jim Adkins uncomfortably alone with minimal instrumentation . â€œPol Rogerâ€ picks the album back up again to end the record on a very strong closer.

While Integrity Blues has its moments, and they shine very brightly, more than half of the album takes the traditional Jimmy Eat World sound and waters it down for some sort of easy-listening take on an otherwise great band. Thankfully, though, the bright spots point to a band that hasnâ€™t entirely lost its way, and which still has the potential to get it right on their next album.