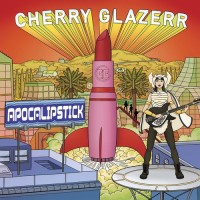 When I first heard Cherry Glazerr's Haxell Princess I could tell they were going places. It was cute, albeit teenage angst bottled up with a poppy fizz. Apocalipstick finds the band, lineup shifts and coming-of-age stories intact, shaken up and frothing out the bottle mouth -- older, wiser and cynical. Clem Creevy (lead vocalist) reiterates that as time passes, naivety and innocence have to be lost to go forth as sheep among wolves, and with this notion, she puts to bed her 15 year old self from the last record. This album touches on individuality, sexuality, choices, the state of the world and segregation; and so much more. The band proceeds to unleash its finest take on dark melodic dream-pop, littered with enthralling hooks on its backdrop, to create a wall of sound that sinks its teeth into you from all angles.

"Told You I'd Be With The Guys" and "Moon Dust" are great examples of this. Sultry, poignant and embedded with an ominous atmosphere. However, there's still a simplicity to be found as on the previous album. What stands out the most is how Cherry Glazerr's grown in range. Their artistic drive and passion (as seen when Clem featured with Death Grips) is as unabashed as ever and honestly, it's a unique freshness I felt they'd take three of four records to cultivate. The synth-essence, the emo, the Eurocentric shoegaze and of course, the morose indie-flair are all jammed in so smartly. From the jangly surfer jam "Humble Pro" to the slow burn and winding angular guitars on "Nuclear Bomb", this album catches you at every turn, and leaves you drifting off into a haze.

Apocalipstick is every bit as captivating and mesmerizing as I wanted it to be. There's something cinematic in how they capture from so many artists - Interpol, Ting Tings, Gorillaz, Lana Del Rey, The Killers, Arcade Fire and the lot. Unconventional at times, yet so straightforward. "Lucid Dreams", for example, feels like a Silversun Pickups track with its shimmery haze and cutting riffs. "Sip O' Poison" then engulfs you in that garage/psych rock feel (a la Plague Vendor) while "Nurse Ratched" brings things home with another guitar-intricate shot of indie scotch, sending all the feels coursing through your veins. By the time the self-titled track drops the curtains in a hard-rock anthem, signalling the march of war, you'll certainly have a lot to process. That's about the time it sets in. Apocalipstick isn't just a record, it's an experience about being hungry, fearless and restless in a world that condemns those for being such.